(Fourth of a series)

TACLOBAN CITY, Philippines—At a local gym where pubescent boys and girls play, the staccato rapping of rat-a-tat-tat fills the air daily as Marian Malinao, a widow with elfin features, drops thousands upon thousands of coins into an electronic counting machine.

Sounding like subdued gunfire, the coin counter organizes the myriad coins into countable quantities. Afterward, Malinao bunches the coins in a rolled, transparent plastic bag and inputs the equivalent amount into an adding machine.

It is just another day for the 38-year-old Malinao, a volunteer coin counter for Tzu Chi Foundation, the world’s biggest Buddhist charity organization now celebrating its 20th year in the Philippines.

Stricken with an unknown disease and occasionally bleeding from the ear, Malinao is an unlikely foot soldier for Tzu Chi’s global army of more than 10 million volunteers working in 46 countries.

“It’s lonely and boring, but I like my job, knowing I am making a difference in the world,” said Malinao, a mother of five children.

But despite her delicate condition and the tedious and repetitive work she does every day, her role in a roomful of coins at the Leyte Progressive High School gym makes her a vital cog in a mammoth fund-raising effort that produces millions of dollars for Tzu Chi’s global relief work.

Malinao’s work makes it possible for Tzu Chi—a 1991 recipient of the Ramon Magsaysay Award, Asia’s equivalent of the Nobel Prize—to fund its charity work around the world, from providing medical care to illegal immigrants in the United States, to setting up recycling centers, to disaster relief after Hurricanes “Katrina” and “Sandy,” and even working in Burma (Myanmar) and mainland China, where traditional Western charity groups are not allowed.

But Malinao’s work does not go unnoticed for Alfred Li, the chief operating officer of Tzu Chi Philippines. 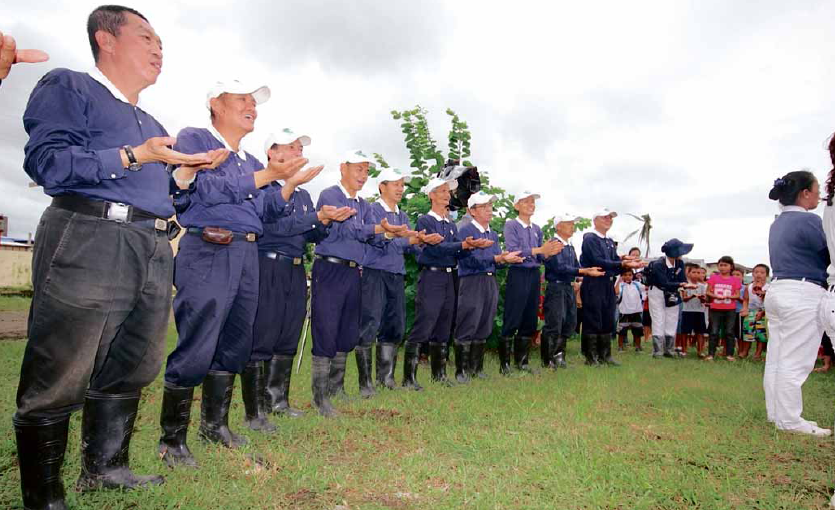 ARMY OFMERCY Volunteers of Tzu Chi Foundation (left) pray before going into action in Palo town, Leyte province. Photo was taken on Jan. 21. Today, Marian Malinao (above), a Tzu Chi volunteer, counts coins in what is described as a vital cog in the fund-raising juggernaut that raises millions of dollars for the Buddhist foundation’s global humanitarian operation. DANNY PETILLA/CONTRIBUTOR

“I am just amazed at how she does it but her work is essential to our Philippine operations,” said the 60-year-old Li, a native of Hinundayan town, Southern Leyte province.

By Philippine operations, Li was referring to the massive relief and recovery efforts bankrolled by Tzu Chi, seven days after Supertyphoon “Yolanda” (international name: Haiyan) made wastelands of this city and the nearby towns of Palo and Tanauan.

“Yolanda was a mega disaster that required a mega response,” Li said.

Like an army gearing up for battle, Tzu Chi summoned its thousands of volunteers around the world and descended on Tacloban City—ground zero for that disaster a year ago—and went about getting things done quickly and efficiently.

Filling in for PH gov’t

While the government relief efforts were stuck in bureaucratic inertia, Tzu Chi filled the void created by Manila’s slow response to the disaster.

“I am ashamed of the government response. But Tzu Chi immediately made an impact on our lives,” a high-ranking official at the Department of Social Welfare and Development (DSWD) in this city said.

Its blue-and-white-clad volunteers were a welcome sight for the victims still reeling from the storm that killed more than 7,000 people and displaced 4 million others.

By January this year, the group’s gigantic cash-for-work cleanup program had benefited 300,000 in Tacloban City, Ormoc City and nearby towns, removing tons of debris that could have taken months to finish.

“Everyone in my family, including Manilyn, my 12-year-old daughter, joined in the cash-for-work program. What we earned gave us the money to start up a store,” said Virgie Lingan, a 42-year-old widow and councilor of Barangay 68 in Anibong district.

In between these large cash dole outs, Tzu Chi’s core volunteers from Taiwan and their Filipino counterparts set up more than 300 prefabricated classrooms made of fiberglass to replace the ones destroyed by Yolanda’s monster winds.

Founded in 1966 by Taiwanese Buddhist monk Dharma Master Chen Yeng, Tzu Chi is the biggest group that engages in “socially conscious Buddhism,” calling on all its adherents and supporters to use their time and talent to improve society rather than just seek personal and religious enlightenment.

“We do not proselytize. Love and compassion know no religious boundaries,” Li said.

But Tzu Chi’s notion of compassionate relief is infectious.

Last month, 17 American workers from All Hands Volunteers—a US-based disaster relief group—decided to forge ties with Tzu Chi in its bid to build 250 typhoon-resistant houses on a 3-hectare site in Barangay San Jose in nearby Palo town.

One of those volunteers was Sabrina Roberts, a 30-year-old resident of Los Angeles, California, who paid for her own expenses to be able to help Yolanda victims.

“I am not a Buddhist. But the moral benefit I get from working with Tzu Chi is something that makes me feel good inside,” said Roberts, originally a native of Kingston, Jamaica.

Kris Corpin of Sta. Fe town was to receive one of the prefab houses on Saturday, the first anniversary of the disaster.

“Tzu Chi was here for us every step of the way,” said Corpin, a 25-year-old father of a year-old boy.

Back at the gym where Malinao holds fort, a sense of contentment suddenly showed on her half-swollen face.

Twice widowed at ages 27 and 33, Malinao has vowed to soldier on despite what life has dealt her.

Despite suffering from her undetermined illness, Malinao is ready to face her next battle.

“God gave me and my children a second gift of life after Yolanda. I am just thankful that we are alive,” she said.

Church runs out of prayer warriors for the dead