Aquino off to Beijing on Sunday after ‘Yolanda’ anniversary | Global News

Aquino off to Beijing on Sunday after ‘Yolanda’ anniversary

As the provinces hit hard by Supertyphoon “Yolanda” (international name: Haiyan) commemorated the first anniversary of the killer storm, President Aquino spent much of Saturday preparing for his trips to China and Burma (Myanmar) where he would be attending important regional summits.

As Mr. Aquino was busy preparing for his participation in the Asia-Pacific Economic Cooperation (Apec) and the Association of Southeast Asian Nation (Asean) meetings, “other government officials and concerned agencies, primarily LGUs (local government units) that are part of the executive branch are participating in the commemoration activities,” according to Communications Secretary Herminio Coloma Jr. 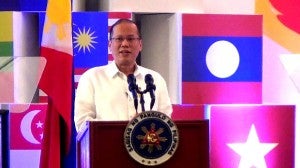 The President flies on Sunday to Beijing, the host of the Apec Leaders’ Summit scheduled from Nov. 5 to 11. US President Barack Obama and Russian President Vladimir Putin are expected to attend this major international forum.

From Beijing, Mr. Aquino will fly to Naypyitaw, the administrative capital of Burma, for the 25th Asean Summit of Leaders to be held from Nov. 12 to 13.

Asked if Mr. Aquino could have rearranged his schedule and joined the rest of the country in remembering Yolanda on Saturday, Coloma replied:

“What is important is that the President has spelled out and given clear directions on the way forward in terms of ensuring that the ‘build back better’ principle is followed in all aspects of the implementation of the CRRP (the Yolanda Comprehensive Recovery and Rehabilitation Program).”

“While preparing to meet with other world leaders in the Apec and Asean summits, he continues to focus on other urgent priorities such as the deterrence and prevention measures on Ebola, Bangsamoro development, and improvement of government frontline services,” Coloma said.

The President went to Guiuan town, Eastern Samar province, on Friday, the eve of the first anniversary of Yolanda, where he defended his administration’s rehabilitation record amid strong criticism that it was moving very slowly.

The CRRP was signed only last week, fully a year after Yolanda, the strongest typhoon ever to make landfall in recent history, packing winds of up to 300 kph and bringing in its wake deadly storm surges as high as 7 meters.

The typhoon claimed the lives of more than 6,000 people and left over a million homeless and without livelihood in the Eastern Visayas.

In the speech he delivered in Guiuan, Mr. Aquino said he wanted the rebuilding of the affected provinces to be deliberate, even if it was criticized as being too slow, to ensure that the tragedy would not be repeated.

At the Apec, Mr. Aquino will take part in the discussions on how to improve mechanisms on disaster resilience, strengthening small, micro and medium enterprises, financial inclusion and domestic governance, among others.

The President will also give a speech on pushing for innovative development and economic reforms and overall development, Coloma said.

According to Coloma, the President’s attendance at the Apec summit this year is part of the preparations for the Philippines’ hosting of the summit next year.

The President will also take part in the dialogue among chief executive officers of the Apec Business Advisory Council, where he will discuss the Philippines’ experience in implementing reforms and the importance of economic reforms to achieve meaningful development, Coloma said.

In Burma, the President will discuss with other Asean leaders cooperation in disaster risk reduction and management and the protection of migrant workers, and the support for small and medium enterprises.

“The President will also take part in the plenary session of the leaders on Asean connectivity. He will also join the launching of the Asean Institute of Green Economy,” Coloma said.