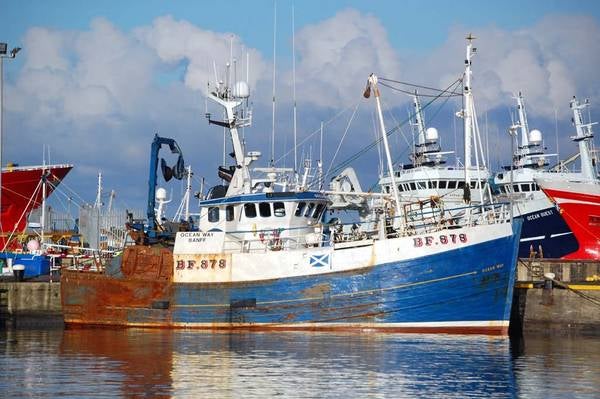 Lost in the North Sea, the trawler Ocean Way. TRAWLERPHOTOS.CO.UK

DALY CITY, California — One British fisherman died, two Filipino crewmen are missing and presumed dead, while two other Filipino crew members were rescued after their fishing boat disappeared in the North Sea on Sunday, November 2.

The Ocean Way, which sailed out of Tynemouth, UK had four Filipino crew and a British captain, reported the Daily Mail http://www.dailymail.co.uk/news/article-2818024/Sailor-dies-two-missing-fishing-trawler-disappears-North-Sea.html.

The 45-year-old skipper, James Noble, was airlifted to hospital by Royal Air Force helicopters but later died. The two missing crewmen are Filipinos.

The two survivors, Filipino men aged 38 and 28-years-old, were taken to Wansbeck Hospital in Northumberland suffering from hypothermia and have been released following treatment.

Two other men – aged 32 and 38 – are still missing after the Ocean Way foundered off the Northumberland Coast. The search operation has now been called off, according to the Daily Mail.

A search and rescue operation was launched for the crew of the fishing trawler after it began sending a mayday signal early on Sunday afternoon.

After coastguard first picked up on transmissions from the Ocean Way’s emergency beacon they unsuccessfully tried to make contact with its skipper.

An RAF rescue helicopter flew to the scene and rescuers managed to pluck two fishermen from the chilly waters at around 2 p.m. Rescuers found Nobel afterwards but were unable to keep him alive.

The Coastguard has been broadcasting mayday relay messages requesting all passing shipping to look out for the missing crew.