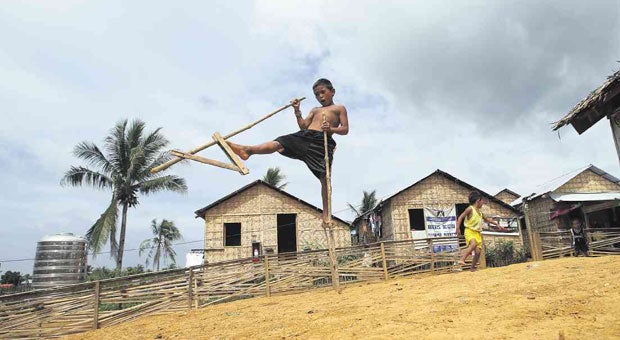 BOY ON STILTS Reggie Macalla, 10, takes a giant step on his stilts (known locally as “kadang”) at a temporary shelter in Barangay Kawayan, Tacloban City. The village is one of the beneficiaries of WASH (Water, Sanitation and Hygiene) projects funded by Unicef and Action Contre la Faim. EDWIN BACASMAS

(First of a series)

MANILA, Philippines–Although battered by one disaster after another, the Philippines does not take too long to rise again.

The United Nations resident humanitarian coordinator, Luiza Carvalho, saw that over the past year as she led the world body’s response to the devastation that Super Typhoon “Yolanda” (international name: Haiyan) left across roughly half of the Philippines—the worst disaster in the world in 2013.

“What it tells us is that probably, in this country, a humanitarian response does not need to take too long,” Carvalho said in an interview.

“Indeed, for a middle-income country, a country where systems are in place such as the Philippines with a lot of internal capacity, there is no need, absolutely no requirement for a long-term humanitarian response. We can really do it faster and in a shorter period,” she said.

Carvalho cited an exchange with fellow humanitarian coordinators from other parts of the world in their annual meeting, where representatives from conflict-afflicted countries marveled at how the Philippines moved from relief to recovery at such a fast pace.

“I look at them, they are looking at me strangely and I feel like eating my words, and they said, “Luiza, we don’t have recovery. We go from one emergency after another,” Carvalho said.

From relief to rehab

The Philippines is not a stranger to successive disasters, either, but the country has been able to surpass the relief stage—the distribution of emergency food, water and other life-saving needs—and move to rehabilitation at a pace not seen in other countries, she said.

For instance, it took up to nine months for survivors of the Indian Ocean tsunami in Aceh, Indonesia, in 2004 to be moved from tents to bunkhouses, despite receiving full international funding of $8 billion, and with fewer affected families, she said.

The UN appeal for Yolanda response was funded only up to 61 percent—$470 million of the $776-million flash appeal—and goals set under its Strategic Response Plan (SRP) were met and even exceeded, including the provision of food assistance, emergency shelter, livelihood support and health services, among other things.

“If you look at Haiti, until today there are still a large number of families surviving in a very precarious way. And we’re talking about five years, almost. And the population that was affected there is much smaller than here,” Carvalho said, referring to the situation in the Caribbean country that is still reeling from the 7.0-magnitude earthquake that struck it on Jan. 12, 2010.

Carvalho noted how the Philippines faced the Level 3 emergency—the highest in the UN disaster scale now hoisted over conflict-stricken Iraq and Syria, among other places—just weeks after an earthquake hit the Visayas and fighting between Moro National Liberation Front rebels and government forces displaced thousands in Zamboanga City.

A 2014 Global Estimates report on displacement, released by the Norwegian Refugee Council and the Internal Displacement Monitoring Center in September, placed the Philippines as the country with the most number of people rendered homeless by disasters last year: Yolanda, with 4 million displaced; Tropical Storm “Maring” (international name: Trami), with 1.74 million displaced; and Typhoon “Santi” (international name: Nari), with 406,000 displaced; and the Bohol earthquake, with 349,000 displaced.

Carvalho said the total figure, along with other humanitarian emergencies that hit the Philippines last year, added up to 10 million displaced people in 2013.

“So comparing to other experiences, we can say that the Philippines is in a satisfactory, very positive path. Considering the size of the event, the path of the response is very satisfactory,” Carvalho said.

For the UN agencies that have been working closely with the Philippine government throughout the emergency, the transition from emergency relief phase to recovery and rehabilitation efforts meant scaling down operations on the ground early.

The UN country team released its final monitoring report on Yolanda response and recovery efforts in August, three months ahead of schedule, both because of “significant progress [that] had already been made” out of the Strategic Response Plan, and in response to the government’s decision to shift fully from relief to recovery.

“It was a decision that matched reality,” Carvalho said.

“So it was not an early close, but it was more a reflection of what was going on. It was an update of what was the response so far, so we came to the conclusion that the structures we had in the country would suffice for us to be engaged on the ground,” she said.

Currently, only seven of the original 14 cluster teams are working on the ground, and all are also beginning to phase out work, Carvalho said.

The UN-proposed cluster response system, which the Philippines adopted in 2007, has worked well for the country, she said, citing feedback from local officials on how the sector-based approach helped make disaster response more efficient.

Under the system, UN agencies, the government and partner organizations team together in clusters on a per-need basis such as food security, water, sanitation and hygiene (WASH), shelter, health and logistics.

“I particularly tend to think that there is a good connection (among humanitarian actors), the fact that we have gone through several responses, and knowing how to respond. For municipalities, the provincial level, it (the cluster approach) makes a lot of difference. It is well integrated in the country and the government is doing well with this system,” Carvalho said. 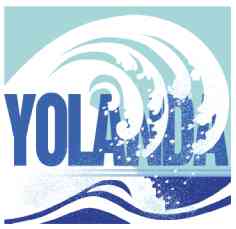 As rehabilitation efforts continue, housing is now the top priority, with the goal of moving survivors out of tents and evacuation centers and into more stable bunkhouses before Christmas.

“The goal now is by December, there will be zero evacuation centers and zero tents,” Carvalho said.

She said about 400 families remained in tents in severely hit Tacloban City, while 5,500 more families (about 25,000 people) were expected to be transferred to bunkhouses.

With the Philippines among the world’s most vulnerable countries, Carvalho is hoping that the lessons from Yolanda will spur sustained disaster mitigation efforts, particularly in the development of resilient housing.

For one, she underscored the need to match available technology with practical knowledge to help Filipinos protect themselves from the hazards of nature.

Carvalho cited how construction methods could be tweaked to build typhoon-protective features into homes, such as the use of hurricane straps and clips to reinforce beams and roofs of houses.

“We believe technology should match knowledge and should come together and really create an enabling environment that will help the natural resilience of the Filipino people. So we cannot allow them to move from using natural materials to new building material without really knowing how to handle this,” she said.

The International Organization for Migration built several resettlement houses in the Yolanda corridor with this feature, which could help structures withstand winds of up to 190 kilometers per hour, Carvalho said.

The United Nations is looking to train communities on the installation of hurricane straps in homes, counting on the international community for support.

Aquino unhappy with delays in rehabilitation of ‘Yolanda’-hit areas