When you are the Pope, you get the oddest gifts.

When John Paul II was in Manila for the World Youth Day in 1990, he received a kubing from my son, actor Gabe Mercado. To the amused Pope, Gabe played the bamboo mouth harp, which has the soft sound of a sleepy owl.

It was not the first time for Gabe to meet Pope John Paul II. During the Pontiff’s first visit to Manila (the papal residence then was the nuncio’s house on Taft Avenue), Gabe’s second grade class was invited to the balcony where the Pope came out to bless the people gathered for him. But first, he blessed the little ones standing with him in the balcony. 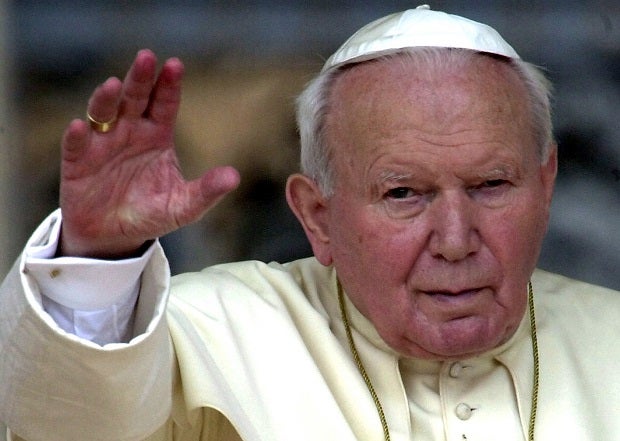 In turn, you get the oddest gifts from the Pope.

At that visit, the students from Southridge were positioned on Roxas Boulevard right across the Baclaran church, the first church that the Pope entered shortly after he arrived in Manila. The students carried two giants dressed in the Southridge uniform, the better for the Pope to see them.

The month before the visit, my son Wawel Mercado was suspended from his class in Southridge because of a misdemeanor. But he still went to school to build the giants that were made like a bamboo cage. He carried one of them to catch the Pope’s attention.

This was the Pope’s gift to Wawel, a suspension from his suspension.

I was assigned to this coverage of the Pope to write the text for the entire visit that reached the Visayas and Mindanao. There were assigned reporters from the field. But Manila was my personal coverage—to follow the Holy Father wherever he went.

The first sighting was in Baclaran, right beside the giants of Southridge. Since I was no giant, I stood on top of an ice cream cart with the sorbetero (ice cream vendor) holding my hand as the two of us received the Pope’s blessing.

In Manila, there were other sightings, other blessings. One occasion was at the gate of the home of Cardinal Sin, where we were a large group. As the car bearing the Pope entered, we were pushed aside with loud murmuring. A tall young man hushed us down. He was Gary Soria who, some years later, was ordained a priest in Rome by John Paul II.

In Rome, at the canonization of Lorenzo Ruiz, I was with Fr. James B. Reuter’s drama group that presented “400 Years of Christianity in the Philippines.” My son Paolo Mercado took the role of Lorenzo Ruiz. Also in this drama group was his younger brother, Gabe. When you are in Father Reuter’s group, if you are male, you are just one more body. No star, no special treatment.

In Rome, Paolo was assigned to look for lumber that would be used in the drama as the cross. Just a kid, who had never been to Rome, Paolo and a buddy, also in Father Reuter’s group, took the bus and headed for the Philippine Embassy where the staff found and delivered the lumber to the papal auditorium where the performance was to take place.

On the stage of the papal auditorium, the Reuter group built the set and did all the assembling and hammering. Some of us, the chaperones, were scattered among the seats, some of us snoozing.

Suddenly, at one of the side doors, a tall, white figure quietly appeared. Some of us thought it was an apparition, perhaps an angel. It was the Pope himself, John Paul II, curious about the hammering and the young non-Italian cast and crew working on his stage.

At the end of the presentation, which the Pope did not see, we heard whispers that he would meet the Reuter group. We were then pressed against the wall of one side of the auditorium.

Suddenly, he was among us. This tall, commanding person with ruddy cheeks and a kind smile touched each one of us with the sign of the cross on our foreheads.

From John Paul II was the most surprising gift: I suddenly spoke in Spanish to him at the public audience. I read and comprehend Spanish but I do not speak it.

I was with my husband, Tony Mercado, then in a wheelchair after a coronary bypass. We were told that the Pope would bless each infirm person, as he did Tony with a sign of the cross on his forehead.

As I leaned toward the Pope, I spoke to him in Spanish fluently and joyfully, saying we are from Manila and that we love him. John Paul II answered, “Dios te bendiga (God bless you).” And I held his hand, trying not to cry.

In October 2000, recently a widow, I went to Rome with my daughter, An Alcantara. For almost two weeks, we lived in a hotel just off the Vatican, an hour’s walk when we attended the Mass there.

Every Wednesday, it is customary for the Pope to have a public audience, so on one cold and rainy morning, we went. We waited for his blessing as he passed in his papal car near us, with An running close almost at his elbow.

By then, the Pope was infirm, slowed down and bent by Parkinson’s disease. His face was pink and ruddy, although his smile was a mask of suffering.

It took five years more before he was called home. Pray for us, dear St. John Paul, and speak well of us to our Father God.