MANILA, Philippines—It was a bitter goodbye for the German fiancé of slain transgender Jeffrey “Jennifer” Laude as he finally left the country Saturday afternoon with the prospect of not being allowed to return.

Before taking his flight to Germany, Marc Sueselbeck made a last tearful plea to Philippine authorities to allow him to return on March 13 next year, the day he and Jennifer were supposed to get married.

“I am begging on my knees. Please don’t bar me from going back to the Philippines, don’t bar me from seeing her grave, from taking part in the trial,” Sueselbeck told reporters outside Ninoy Aquino International Airport Terminal 1.

Sueselbeck left aboard China Airlines flight CI 704 to Taipei and then to Germany at 4:45 p.m. He was escorted by Bureau of Immigration agents to the departure area where he waited for his boarding call.

On Oct. 26, Sueselbeck was stopped by immigration authorities from boarding his flight after he was charged by the Department of Justice with being an undesirable alien.

Sueselbeck had climbed over a fence at Camp Aguinaldo and shoved a Filipino soldier in an attempt to see US Marine Joseph Scott Pemberton who is suspected of killing Laude on Oct. 11. 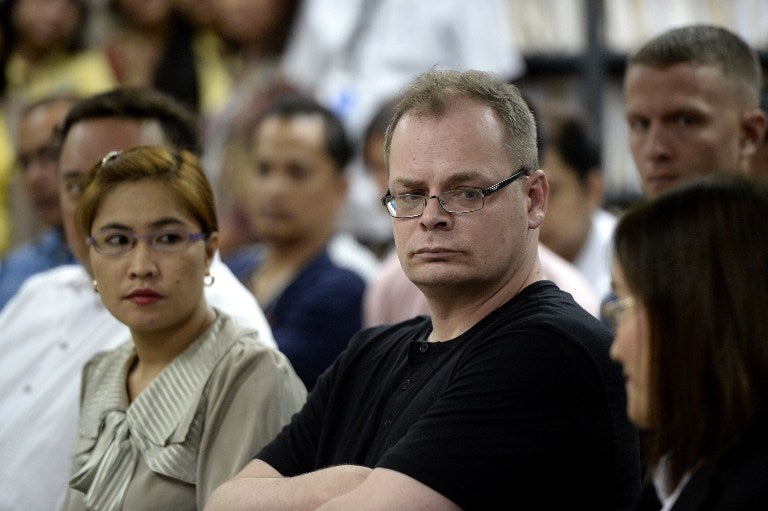 “For those Filipinos disrespected by me and by what I did, I want to apologize,” the German national said.

He expressed his gratitude to members of the Armed Forces of the Philippines at Camp Aguinaldo where Pemberton is being held.

“I want to thank all those people in that compound for acting the way they did. We could have been injured, but they handled it with professionalism,” he said.

He also thanked the Philippine government for allowing him to leave. “I know they could have prolonged all this. Thank you that you allowed me to leave. That was my intention last week,” he said.

With his appeal for voluntary deportation granted, Sueselbeck’s name will automatically be placed on the immigration blacklist, which means he is barred from reentering the Philippines.

The German said he intended to file an appeal to lift the blacklist order.

“This is about a murder case that we still can’t understand. If forgiveness is part of your Catholic culture then it’s time to show it,” Sueselbeck said, explaining that his actions were spurred by an “extraordinary situation.”

Sueselbeck sobbed when he began to address his slain girlfriend. “I promise you Jennifer that I will come back. I will not let you stand alone. I hope you find rest with God,” he said in front of television reporters.

Jennifer’s mother and sisters who were at the airport to see him off hugged him tightly, promising him they would pursue the case to its end.

Harry Roque, lawyer of Laude’s family, said Sueselbeck’s deportation was a relief and they could now focus on the murder case.

On the eve of his departure, Sueselbeck visited Laude’s grave.

He joined Laude’s sister, Michelle, at the Olongapo Heritage Garden, where they said prayers and lit candles at the grave.

Sueselbeck said he would also have wanted to return next year for Laude’s birthday on Nov. 4 and for “the anniversary of our engagement on Dec. 23.”

As this developed, members of the Laude family appealed to AFP Chief of Staff Gen. Gregorio Pio Catapang to grant them access to the Camp Aguinaldo facility where Pemberton is detained.

In a letter dated Oct. 27,   lawyers Romel Bagares and Ethel Avisado on behalf of the Laudes said there was still no proof that Pemberton had been turned over by the US military to the AFP for custody.

“As you know, other than reports in news media that Pemberton has been moved to the facility, Jennifer’s family does not have any clear proof that he is in fact now being held at the MDB-SEB facility or that the person reported to have been placed in custody there is in fact the same Pfc. Pemberton who stands accused of killing the victim,” the lawyers said. With reports from Allan Macatuno, Inquirer Central Luzon, and Cynthia Balana

Sueselbeck leaves, says sorry for ‘not being aware of political part’ of Laude slay

Marc Sueselbeck: A ‘big price to pay’ for ‘losing control’ over Pemberton