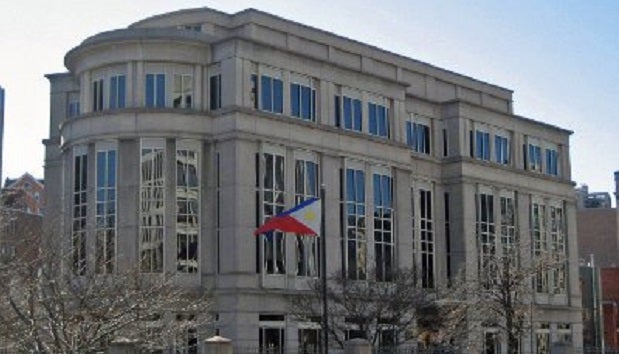 For a visitor from the Philippines, the warmth offered by the Philippine Embassy in Washington when the temperature drops to about 16 degrees Celsius at noon gives the feeling of being at home.

But there are visitors who extend their stay, making the four-story, two-decade-old building at 1600 Massachusetts Avenue practically their home.

The embassy is one of the Philippines’ busiest foreign posts, and on days leading to Nov. 1 staff members say ghosts that inhabit the building are also busy making their presence felt.

They say that after you’ve had two cups of coffee and heard about how the ghosts could be quite playful, making sure you didn’t feel alone, you’d wish you didn’t have to go to the cold and dimly lit toilet. (And if you really have to go, you do it as fast as you can.)

There’s a story about how the husband of an embassy staff member had to go to the toilet one afternoon.

The handle of the doorknob on the men’s room’s door turned even before he could hold it.

Thinking that someone was coming out, he waited. When the door didn’t open, he went in and found no one there.

The ghosts do all sorts of things—opening and closing filing cabinets, raising the television’s volume, sitting in a mothballed car in the parking lot, even talking to a Hispanic cleaner.

But stories of ghostly encounters in the stately cream-colored building are nothing new.

In 1995, a story was written about how an embassy driver was scared out of his wits when he smelled burning candle in the room where the skull and bones of Delia Maga, the Filipino domestic helper who was killed in Singapore, were stored.

Maga’s bones were taken to Washington in 1995, a few months after Contemplacion was executed in Singapore, for American experts to examine and determine whether Maga died by strangulation, an autopsy finding on which Filipino and Singaporean pathologists differed.

It also used to be that the embassy was required to inspect and seal the coffins of deceased Filipinos before the bodies were flown back to the Philippines.

Some staff members think this has attracted ghosts to the building, or perhaps the souls of some Filipinos who died have opted to remain in the United States.

Several years ago, a staff member saw someone in the driver’s seat of one of the mothballed cars in the building’s basement.

Another saw a man in a barong Tagalog in the embassy’s legislative office on the third floor, which was supposed to be empty.

There was a time when a Filipino driver was backing up an embassy vehicle in the basement parking when he saw a middle-aged woman in blue dart from behind, making him hit the brakes.

His companion, a Filipino utility man, also saw the woman on the side mirror. Both men jumped off the vehicle to see if the woman was hit.

They both suspected the woman was Corazon Alvarado. Yes, the ghost had a name and, in fact, introduced herself to one of the embassy’s cleaners a few years ago.

Alvarado struck a conversation with the cleaner, speaking to her in Filipino. She laughed when she realized the cleaner was Hispanic and didn’t understand a single word of what she had said.

It wasn’t clear, according to staff members’ accounts, how the cleaner realized Alvarado was a ghost.

But she did report to the embassy staff that Alvarado said she and the other ghosts inhabiting the embassy were “good spirits” who did not mean any harm.

Alvarado, the cleaner said, claimed they were “sent” to look after the embassy and “guard and protect the staff.”

Alvarado also asked for prayers. Last year, the embassy sponsored a special Mass for the ghosts.

They can get quite playful. Perhaps it can be boring in the afterlife.

Staff members say it’s not strange to hear a “psst” in the halls once in a while.

A few weeks ago, an embassy official could not get in through a door in the basement even if he was punching the right combination for the lock.

He asked staff members if the combination had been changed. They said no.

Consul Elmer Cato told the Inquirer that work at the embassy is not disrupted by such ghostly encounters.

“No one has had any negative experience and, yes, if there really are ghosts here, they seem to bring no harm. Perhaps they just want to be remembered and be included in our prayers,” Cato said.

Why antiques can be haunted