Should Sueselbeck be blacklisted? Gov’t probe will find out 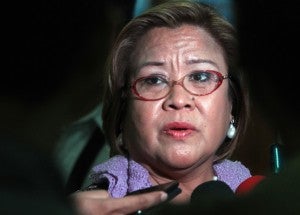 “If we allow him to leave, there won’t be a chance to determine if he is undesirable or not,” De Lima told reporters.

She explained that the effect of declaration of undesirability is not only deportation but also his inclusion on the blacklist.

“So hindi na siya basta-basta pwedeng makabalik unless he files a motion or a petition for the lifting of the blacklist order,” she said, adding that his leaving the country should be on the government’s term not his own volition.

“It’s really just about upholding the rule of law, upholding our integrity and pride as a nation,” she added.

De Lima assured that Sueselbeck will be accorded due process.

Last Wednesday, in a commotion aired live on television, Sueselbeck was seen pushing a soldier after the German and Laude’s sister, Marilou, climbed a fence in an attempt to confront US Marine Joseph Scott Pemberton at his temporary detention cell at the Mutual Defense Board-Security Engagement Board compound in Camp Aguinaldo.

The Armed Forces of the Philippines later said it would report Sueselbeck’s “misbehavior” to the German Embassy and the BI.
“It’s not just really a matter of apology. And if AFP insists on having him declared as undesirable alien, and having him deported, there has to be a process,” De Lima said.

Palace: Sueselbeck given due process despite ‘undesirable’ alien tag