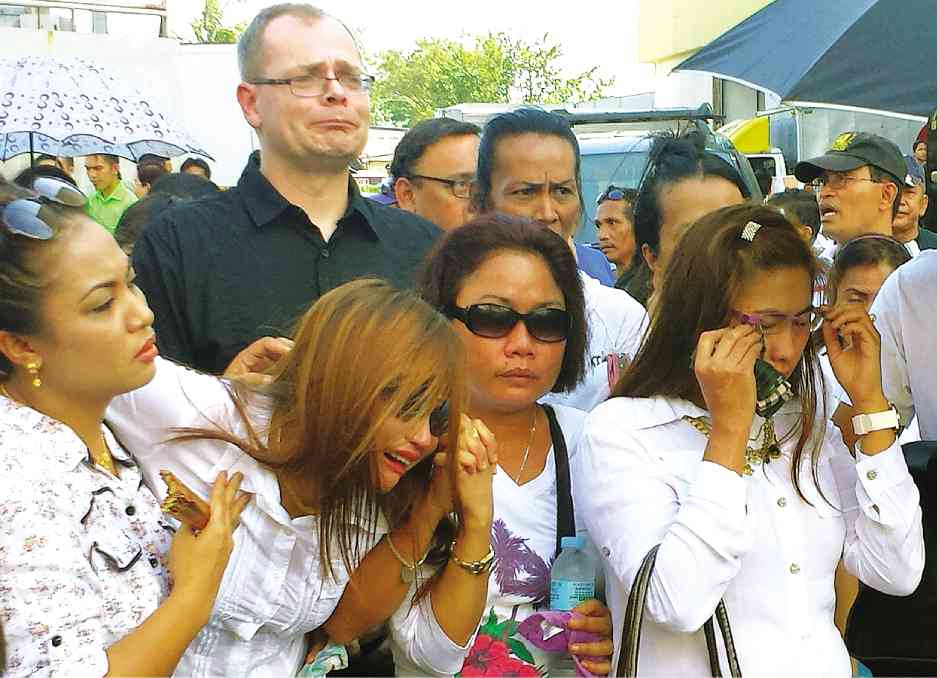 GOODBYE, JENNIFER German Marc Sueselback holds back his tears as his fiancée, transgender woman Jeffrey “Jennifer” Laude, is laid to rest on United Nations Day on Friday. Laude’s sisters Michelle and Marilou (foreground, left) break down as their sibling’s coffin was brought to an Olongapo church.

OLONGAPO CITY, Philippines—Friday was United Nations Day for Olongapo City’s schoolchildren, who poured into the streets wearing costumes, a few bearing the American Stars and Stripes.

Olongapo has always been an American city due to its long association with the former US naval base here, now the site of a sprawling special economic zone called Subic Bay Freeport.

But the bright colors worn by the children masked the sad relevance of Oct. 24 to the family of slain transgender woman Jeffrey “Jennifer” Laude.

Laude was buried on Friday, 13 days after she was found dead in the bathroom of a motel room here after checking in with a US serviceman on the night of Oct. 11.

Much like Laude’s murder investigation, the funeral was fertile ground for criticizing Philippine and American authorities for the treatment of Laude’s suspected killer, US Marine Pfc. Joseph Scott Pemberton.

On Wednesday, Pemberton was flown from his warship, the USS Peleliu, to the Armed Forces of the Philippines’ headquarters in Camp Aguinaldo in Quezon City, where he would be held during the investigation and trial.

After the service, Laude’s white coffin was marched around downtown Olongapo before it was taken to Heritage Garden at 4:45 p.m.

Justice Secretary Leila de Lima said on Friday that the Bureau of Immigration was waiting for the military to move for Sueselbeck’s deportation but was ready to take action against the German on its own.

Sueselbeck said on Thursday that he had apologized to camp officials for his actions.

The military said, however, that it wanted Sueselbeck deported and declared an undesirable alien despite his apology.

AFP Chief of Staff Gen. Gregorio Pio Catapang said on Friday that Sueselbeck “assaulted not only a Filipino soldier but also the dignity of the country as a whole.”

“I want him to be deported and be declared an undesirable alien,” Catapang said.

Sueselbeck said he was flying back to Germany on Sunday but he would return for Pemberton’s trial.

The German was visibly distraught at Laude’s funeral.

So were Laude’s mother, Julita, and her sisters, Marilou and Michelle. They all broke down as they sprinkled holy water on Laude’s coffin during the service.

“Ganda, we will never forget you. Thank you for the good memories,” Marilo   said in her eulogy.

Michelle had a sharper message: “This tragedy is hard to swallow but we need to accept that it happened so we can proceed and fight for justice.”

Many people flocked to the church, most of them friends and relatives of Laude.

Earlier on Friday, Commission on Human Rights Chair Loretta Ann Rosales met with the Laude family and informed them that the agency would conduct an independent investigation of her murder.

Rosales said she was outraged over hate crimes committed against the LGBT (lesbian, gay, bisexual and transgender) community.

“I support calls for the immediate passage of the antidiscrimination bill, which I first authored in 1998, as well as the legal recognition of hate crimes,” Rosales said.

“All three branches of government must work together to guarantee a national machinery to prevent and prosecute hate crimes,” she said.

Autopsy reports released last week suggested that Laude may have been severely beaten before she was drowned in the toilet bowl of the motel room.

Laude’s death has brought some changes in the city.

The motel where Laude was found dead has removed its signboard.

In the downtown area, Laude’s death elicited harsh commentaries from pedestrians who assumed the worst about her because of a lingering bias against homosexuals in the city.

The family’s lawyer, Harry Roque, dealt with the bias when he spoke to a crowd outside the church on Friday.

“I hope we all understand what the family is going through,” he said.

“There are many reasons why this happened to Jennifer. One of these reasons is for the public to awaken and fight for our interest so this would not happen to anyone like Jennifer.”

The church service also gave Sueselbeck and Marilou the opportunity to apologize again to the military for their action at Camp Crame on Wednesday.

“We are sorry for what happened. It was not our intention to climb over the fence. We ask for the forgiveness of the soldiers,” Marilou said. With reports from Tarra Quismundo and Julie M. Aurelio in Manila

Read Next
PH, US want VFA to work, not amend it
EDITORS' PICK
SMDC The Good Guys on the Go
COOCAA TV Bounce Back Sale offers up to 50% off
Following WHO advice, Philippines resumes hydroxychloroquine trials
WHO resumes hydroxychloroquine coronavirus trials
Cherry Mobile teams up with Cloud Panda PH, launches online store
DOLE eyeing P20-B subsidy for MSMEs
MOST READ
Philippines’ youngest survivor of COVID-19 dies
Piolo gets first call slip from ABS-CBN to resume ‘ASAP’ taping
It’s final: Anti-Terror Bill now only needs Duterte’s signature
‘She had no right to be in Singapore’: Youth pleads guilty to abusing Filipino maid
Don't miss out on the latest news and information.