What Went Before: USS Guardian running aground Tubbataha Reefs 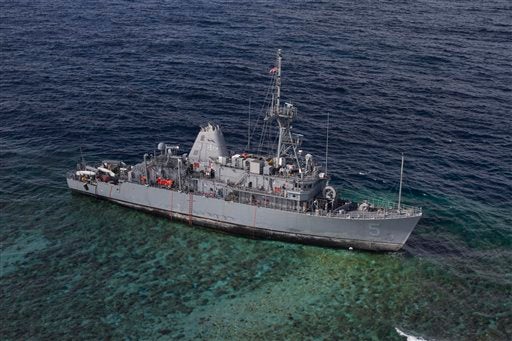 MANILA, Philippines—On Jan. 17, 2013, while sailing to Indonesia following a port call on Subic Bay, the minesweeper ship USS Guardian ran aground on the south atoll of the Tubbataha Reefs, a delicate ecosystem in the Sulu Sea treasured for its rich marine biodiversity.

The grounding damaged 2,345 square meters of coral on the reefs, considered a World Heritage Site by the United Nations Educational, Scientific and Cultural Organization (Unesco).

After 10 weeks of salvage operation by a Singapore-based salvor company hired by the US Navy, the ship had to be dismantled piece by piece so it could be lifted without damaging the reef further.

The ship was then decommissioned and stricken off the naval registry.

In April 2013, the commanding officer of the Guardian, Lt. Cmdr. Mark Rice, and executive officer and navigator Lt. Daniel Tyler, were relieved. The two were the assistant navigator and deck officer, respectively, at the time of the grounding.

During the same month, the Tubbataha Management Office (TMO) said it would fine the United States not more than $1.4 million (about P60 million) for the damage to the Tubbataha Reefs.

The report of the assessment team, composed of divers and researchers from the TMO and World Wide Fund for Nature-Philippines, showed that the damaged area spanned 2,345.67 square meters, smaller than the initial estimate of 4,000 sq m, which would have pushed the fine to $5 million, or about P200 million.

In June 2013, a report by the US Navy, which conducted its own investigation, said the lack of leadership and faulty navigational equipment led to the grounding of the Guardian. The report added that further administrative action was being considered against the four officers of the ship.

On Sept. 15, US Ambassador Philip Goldberg said during the Kapihan sa Embahada at the US Embassy that the United States would soon pay compensation to the Philippines for the damage caused by its Navy warship.

“We’re going through the last phases of the review. You know whenever something like this happens, it requires legal and other reviews,” Goldberg said. “I am convinced that very soon we’ll have an announcement to make on it.”

On Sept. 16, the Supreme Court, which had earlier said it had no jurisdiction over the case, cited Article 31 of the United Nations Convention on the Law of the Sea (Unclos) and issued a ruling that the United States should be held liable for the damage.

The high court, however, denied the petitioners’ bid for the issuance of a writ of kalikasan that would hold Philippine and American officials, including three US military officials, liable for administrative, civil and criminal suits, saying that such claim should be “made in a separate civil suit” or through criminal action according to the rules on environmental protection and the writ itself.

The high court left the matter of compensation and rehabilitation to the executive branch, given the ongoing claims process through diplomatic channels.

The Department of Foreign Affairs issued a statement a day after the ruling, saying it would continue to pursue talks with the United States over full compensation for the damage on Tubbataha Reefs by a US Navy ship. Inquirer Research

US agrees to pay P87M for damage to Tubbataha