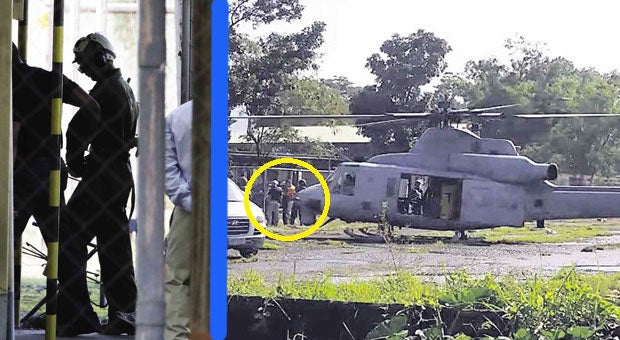 DETAINED IN CAMP AGUINALDO US Marine Pfc. Joseph Scott Pemberton, a suspect in the killing of Jeffrey “Jennifer” Laude, a transgender Filipino woman, is escorted to his detention facility, an air-conditioned container van, after he was airlifted to Camp Aguinaldo in Quezon City aboard a US military helicopter. AFP Chief Gen. Gregorio Pio Catapang said Pemberton was flown to the AFP headquarters, easing a looming irritant over his custody. AP PHOTO AND VIDEO GRAB COURTESY OF LT. COL. HAROLD M. CABUNOC/AFP-PUBLIC AFFAIRS OFFICE

MANILA, Philippines–Taking exception to criticism that US Marine Pfc. Joseph Scott Pemberton was being treated by the Philippine government with kid gloves, President Aquino said on Wednesday that in fact the suspect in the gruesome killing of transgender Filipino Jeffrey “Jennifer” Laude was getting “special negative treatment.”

Pemberton was transferred Wednesday by helicopter from his warship to the Armed Forces of the Philippines’ headquarters in a compromise that followed huge public pressure for him to be handed over to local authorities.

Accompanied by fellow US Marines, Pemberton arrived at Camp Aguinaldo in Quezon City at 8:45 a.m. on a US helicopter. Another US helicopter carrying Philippine troops escorted Pemberton’s chopper from the USS Peleliu, which was docked on Subic Bay, to the AFP’s main camp.

The government said Pemberton’s transfer was in response to its demands to the United States, as it sought to assure angry critics that he would not receive special treatment.

Aquino said critics were “jumping the gun” on the government by alleging special treatment. He pointed out that the investigation of Laude’s killing was still in the preliminary stage.

But even if Pemberton has not yet been charged, the US Marine’s transfer to Camp Aguinaldo “is a very healthy development,” Aquino told a foreign correspondents’ forum in Pasig City shortly after Pemberton was moved.

“What else can I say? Actually he is getting treatment that is less than that accorded by our system to a Filipino accused of the same crime,” Aquino said.

“He is not being treated with kid gloves and the Americans, may I reiterate, are conforming to the [Visiting Forces Agreement under which] they have to make this person and others available for both the investigative and the judicial processes that are forthcoming,” he said.

“In fairness to the Americans, they have made available the suspect for investigation and for judicial processes, which the treaty calls for. I don’t think there is any shielding. There is the desire for protection of everybody’s rights, from the victim to everybody who is accused,” Aquino said.

The 19-year-old Marine, who arrived in handcuffs, will be detained in a 28-cubic-meter, air-conditioned freight container with military-type cot bed and grilled windows, directly guarded by US Marines while Philippine military police will be posted outside the fenced compound of the Joint US Military Assistance Group (Jusmag), Catapang said.

“They agreed to put him in a facility that will pass US custodial standards,” Defense Secretary Voltaire Gazmin said. “We’re happy with this because he’s a suspect in a crime that was committed in our country.”

Foreign Secretary Albert del Rosario said the arrangement showed “mechanisms are in place so that justice can be served,” adding that there was strong cooperation between the United States and the Philippines.

While Pemberton has been moved to a Philippine camp, he remains in US custody, the US Marine Corps said, citing the bilateral VFA, which stipulates treatment of American military personnel suspected of breaking the law.

The Marine Corps takes allegations of illegal acts by its forces seriously, Marine Corps Pacific spokesman Col. Brad Bartelt said, but added: “It is important to remember that anyone accused of a crime is presumed innocent until proven guilty in a court of law.”

US Secretary of State John Kerry said on Monday that Washington seeks no special privilege for Pemberton but only protection of his rights.

The Department of Foreign Affairs (DFA) acknowledged that the United States retains custody of Pemberton, but DFA spokesman Charles Jose said the Philippines continues to have jurisdiction over the US Marine’s criminal case.

“While the US military authorities will continue to have a legal hold on him, the presence of AFP forces in the area should reassure the Filipino people, especially the family and loved ones of Jennifer Laude, that the Philippines is aware of his location at all times and that he will not be departing the country until the conclusion of the entire process,” Jose told reporters.

Jose said US military authorities had custody of Pemberton and that they would be responsible for his food in detention. Any access to him would need US approval, he said.

Philippine and US authorities engaged in a high-profile custody battle over another US Marine, Lance Cpl. Daniel Smith, who was found guilty and sentenced to life in prison on charges of raping a Filipino woman in 2005, also at Subic Bay Freeport in Olongapo City, where Laude was found dead on the bathroom floor of a motel room late on Oct. 11.

Smith was held at the US Embassy in Manila until the Court of Appeals overturned his conviction in 2009, allowing him to leave the Philippines amid anti-US protests.

In the latest case, police and witnesses said Pemberton and Laude, 26, met at a disco bar in the red-light district of Olongapo, then went to a motel. Laude’s body was later found in the bathroom. She had apparently been drowned in the toilet bowl, according to police Chief Insp. Gil Domingo.

Laude’s family brought a complaint for murder against Pemberton and served a warrant at the US Embassy for his appearance at the Olongapo City Prosector’s Office for preliminary investigation on Tuesday.

Pemberton did not show up. City Prosecutor Emilie Fe de los Santos gave him up to Oct. 27 to answer the complaint brought by Laude’s family.

With Pemberton in Camp Aguinaldo, the USS Peleliu left the Philippines at 12:45 p.m. for its base in Okinawa, Japan, yesterday.

“He arrives by helicopter. He’s shielded from the reaction of the public to him. And they didn’t inform us beforehand. Suddenly, he’s now in an air-conditioned [container]. And his guards are American personnel,” Santiago told reporters after the opening an inquiry into Laude’s death.

“We have our own guards, and yet they don’t seem to trust them. And we’re in our own country, not America,” Santiago said.

The fact that Pemberton is being held at the Mutual Defense Board-Security Engagement Board compound at Jusmag smacked of special treatment, she said.

Kabataan Rep. Terry Ridon said Pemberton’s transfer was a positive development in the Laude case, but added that joint custody may not be advantageous to the Philippines, as Filipino authorities would need to consult the Americans on anything involving the Marine’s case.

“Besides joint custody is not stated in the Visiting Forces Agreement. Putting Pemberton in this gray area is akin to not granting custody of Pemberton to Philippine authorities at all,” he said.

Joint custody will also not help expedite the investigation, he said. “The Aquino administration must still demand clear, unequivocal surrender of Pemberton’s custody to the Philippines,” he said.

But Justice Secretary Leila de Lima saw Pemberton’s transfer as respect by the Americans for the Philippine judicial process.

“That’s a manifestation that the US government is cooperating. That’s why those still with apprehensions, it does not really pay to be an alarmist. The proceedings are still beginning and there are already doubts just because he failed to appear,” De Lima told reporters, referring to Pemberton’s failure to show up at Tuesday’s preliminary investigation.

She said she was disappointed that Pemberton did not appear at the investigation, but added that that was a strategy of the Marine’s lawyer.

“But the US authorities, we can see their sense of cooperation. Those apprehensions that we will not achieve justice, because he is probably gone, that’s the proof that those apprehensions are incorrect,” she said.

De Lima said Pemberton’s transfer was quietly negotiated by the VFA Commission, DFA and the Department of Justice.

Hours after Pemberton’s transfer, Laude’s mother, two sisters, German boyfriend and the family’s lawyer—trailed by a throng of journalists and TV cameramen—managed to come close to the Jusmag compound and demanded that they be let in.

“This is the family of the woman he killed. Come here,” family lawyer Harry Roque yelled from outside the locked gate. “Mr. American, how come you haven’t even condoled?”

When the Filipino guards refused to open the gate, one of Laude’s sisters, Marilou, and Marc Sueselbeck, Laude’s German boyfriend, climbed over the gate of the compound but were prevented by the guards from getting close to Pemberton’s container located a few meters away.–With reports from Cynthia D. Balana, DJ Yap, Christine O. Avendaño, TJ Burgonio and Jerome Aning in Manila; Allan Macatuno, Inquirer Central Luzon; AP and AFP