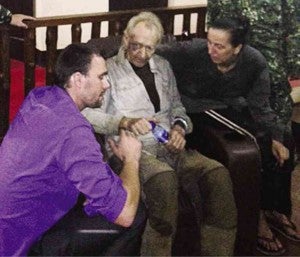 ZAMBOANGA CITY, Philippines—The repercussion of ransom being paid to a crime group that held hostage and released two German nationals recently is being felt most by the family of a businesswoman who is still in the hands of the Germans’ captors, the Al Qaida-linked Abu Sayyaf.

Members of the Abu Sayyaf involved in the Germans’ kidnapping had confirmed receiving P250 million to free their captives, but Malacañang repeatedly denied ransom had been paid for the freedom of German nationals Viktor Stefan Okonek and Henrite Dielen.

Ronald Maravilla, chair of Labuan village here, said the family of Michelle Panes, a market stall owner abducted in August, fear that the woman’s kidnappers would demand an amount that they could not raise.

Maravilla, quoting Noel Panes, the victim’s husband, said the kidnappers had asked for a “very high” amount weeks after the abduction.

“They didn’t tell me the actual amount but they told me it is very high,” Maravilla said.

The kidnappers have not contacted the family since two week after the abduction, Maravilla said.

Malaysian journalist Philip Golingai, in an earlier interview, said the Abu Sayyaf is demanding 3 million ringgit for each of the two captives—Zakiah Aleip, a Malaysian policeman seized in Pulau Mabul in Sabah on July 12, and Chan Sai Chuin, a Chinese national taken from a fish farm in Kunak, Sabah on June 26.

Lt. Col. Harold Cabunoc, spokesperson of the Armed Forces of the Philippines, said authorities are still checking reports that ransom was paid for the Germans.

“The AFP denies the insinuation or hint that some government officials agree to the ransom payment. We fully support the government’s policy of no ransom and no negotiation with any terror group,” Cabunoc told Inquirer by phone.

On Sunday, the military said it discovered an abandoned Abu Sayyaf camp in Barangay Kabuntakas in Patikul, Sulu.

Cabunoc said the camp could accommodate at least 100 people.

On Monday, another camp, also in the village of Kabuntakas, was discovered.

Cabunoc said the smaller camp was a “few hundred meters” from the encampment found on Sunday.

Earlier on Sunday, another camp, with at least 47 bunkers, was discovered in the village of Buhanginan, also in Patikul.

“The troops on the ground strongly believe that the encampment in Buhanginan was used to hide the Germans. They had eye contact with the bandits there on Friday. Julie S. Alipala, Inquirer Mindanao

No ransom was paid, Palace insists