Laude kin ready to forgive a contrite Pemberton, but say justice must be served 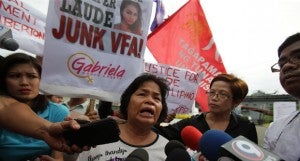 OLONGAPO CITY, Philippines — The mother of murdered transgender Filipino Jeffrey “Jennifer” Laude said on Monday she could forgive the American soldier suspected of killing her child, but the family would still pursue justice for Jennifer.

“Kung ang Panginoon nga nagpapatawad, sino ba kami para hindi magpatawad (If the Lord can forgive those who have sinned, who are we not to follow His lead)?” Julita Laude told the Philippine Daily Inquirer on Monday.

Julita, however, said forgiveness would only come if the suspect, Pvt. 1st Class Joseph Scott Pemberton of the United States Marine Corps, admitted to the crime.

“If he [Pemberton] will admit what he did to my child, we are ready to forgive him. But it does not mean that we will not seek justice until the end,” she said.

Laude was found dead in a bathroom of a motel in this city on the night of Oct. 11, minutes after her companion, whom witnesses identified as Pemberton, left their room.

Marilou Laude, one of the victim’s sisters, said the family has been waiting for Pemberton to face them and ask forgiveness.

“We don’t see any problem forgiving him but we have to get justice for Jennifer before we can truly forgive him,” Marilou said.

Julita and Marilou also appealed to the American government to bring Pemberton to the case’s preliminary investigation at the Olongapo City prosecutor’s office on Tuesday, Oct. 21.

Earlier, the US Embassy in Manila said it would be up to Pemberton and his lawyers to decide if he would appear in the hearing. Pemberton is reportedly held aboard the USS Peleliu docked at Subic Bay here.

“As we have been saying in the past, we want to see him (Pemberton) in person because that’s the only assurance we will have that he is still in the country,” Marilou said.

She said the family would fight for justice and would not enter into a settlement.

“Hindi kami makikipag-areglo sa kanila. Hustisya lang ang hangad namin para sa aking kapatid (We will not enter into a settlement. We only want justice for my sibling),” Marilou said.

Julita and Marilou said they have been preparing for their appearance in a Senate inquiry into Laude’s death on Wednesday. The inquiry was called by Sen. Miriam Defensor-Santiago, chair of the Senate committee on foreign relations.

“Drafting this bill is our immediate response to what happened to Jennifer,” Hontiveros told reporters.

Inside the Subic Bay Freeport, security personnel on Monday morning added more barbed wires at the gate leading to the USS Peleliu in anticipation of protests from militant groups.

On Saturday, Laude’s family members and their supporters protested at the same gate to symbolically serve a copy of subpoena to Pemberton.