Aquino: No need to junk VFA 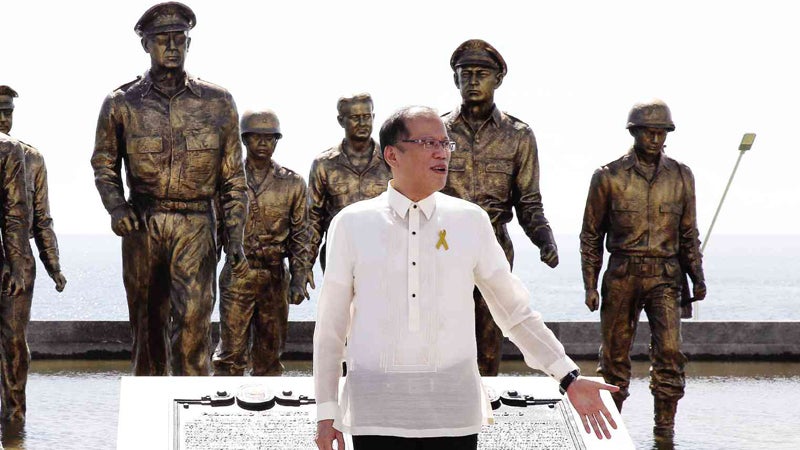 MANILA, Philippines–President Aquino on Monday rejected calls for the abrogation of the Visiting Forces Agreement (VFA) following the killing of a transgender Filipino allegedly by a US Marine in Olongapo City more than a week ago.

Speaking with reporters in Palo town, Leyte province, the President said the government’s priority was to ensure that the victim, Jeffrey “Jennifer” Laude, would get justice.

“Why do we need to abrogate the VFA? I mean, name me any place that doesn’t have crime. And the sin of one person should be reflective of the entire country? I don’t think so,” he said.

“What’s important is [that since] a crime has been committed, get all the evidence that will prove the guilt of the person behind this, and achieve justice,” Aquino said.

The President said Foreign Secretary Albert del Rosario, Defense Secretary Voltaire Gazmin and US Ambassador Philip Goldberg were now “working to resolve this issue” of the United States having custody of the suspect, US Marine Pfc. Joseph Scott Pemberton.

“At the very least [they are] making sure [that] based on the treaty again, he is available or the suspects are available for investigation in any and all judicial processes,” Aquino said.

US authorities are cooperating in the investigation of Laude’s killing and have detained Pemberton aboard the USS Peleliu, which is docked at Subic Bay Freeport in Olongapo City.

The killing has sparked national anger, with left-leaning groups and even some lawmakers calling for the abrogation or renegotiation of the VFA.

The President traveled to Palo Monday morning for the 70th anniversary of the Leyte Gulf Landing, commemorating the return of Allied forces led by Gen. Douglas MacArthur to liberate the Philippines from Japanese occupation forces on Oct. 20, 1944.

Goldberg was among the dignitaries who attended the ceremonies but he did not mention the VFA controversy in his speech.

He said, however, that the US government was cooperating in the investigation of Laude’s killing.

“We are cooperating very well on this investigation stage. We are committed to seeing justice done,” Goldberg said.

In his speech, Goldberg said he was sure the relations between the Philippines and the United States would remain strong.

“As I look ahead, I know we will be faced by challenges and uncertainty but just as was the case 70 years ago, we will prevail,” Goldberg said.

He recalled how Americans and Filipinos worked together during World War II “to achieve what may have at times seemed impossible” and “turn the tides of a war.”

The United States and the Philippines will continue “to renew and expand upon [their] partnership,” Goldberg said.

“When we examine our shared history and our shared victory, when we consider the values that underline our relationship— courage, mutual respect and freedom—there can be no doubt that by working together we will meet any challenge no matter how great,” he said.

Goldberg reiterated US President Barack Obama’s statement in April that “America’s commitment to the Philippines is ironclad.”

The US ambassador said it was “unmistakably embodied in the US-Philippine Mutual Defense Treaty, a pillar of our relationship and a source of stability in the region for over 63 years.”

The Mutual Defense Treaty is the basis of the VFA, which eventually replaced the Military Bases Agreement after the Senate voted to terminate it in September 1991.

Goldberg said both the Philippines and the United States were benefiting from the VFA.

He said the fast response of the United States during the rescue and relief operations in the aftermath of Super Typhoon “Yolanda” (international name: Haiyan) in November last year was made possible by the VFA.

“We were able to deploy our forces so quickly after Haiyan because we have the VFA. Other countries have to go several weeks to make that arrangement. VFA is a very important part of our mutual security structure and cooperation. People should remember all of that,” Goldberg said. “It served the people very well.”

Early in his administration, President Aquino ordered a review of the VFA because of questions about the provision allowing the United States custody of its military personnel “from the commission of the offense until completion of all judicial proceedings.”

Malacañang could not say what happened to the 4-year-old review.

In 2010, Executive Secretary Paquito Ochoa Jr. said: “One of the main bones of contention and opposition to the VFA is the custody of the soldiers who might violate our criminal laws, especially when it’s a nonbailable offense.”

Referring to the case of Lance Cpl. Daniel Smith, who was found guilty of raping a Filipino woman in 2005, he said: “We don’t want that happening again. So we want to review it again so that, at least, we can handle it better … [We hope] it doesn’t happen again during our time.”

A year before he took office, then Senator Aquino threw his support behind a Senate resolution asking the Arroyo administration to abrogate the VFA unless the United States acceded to a renegotiation.–With reports from Joey Gabieta, Inquirer Visayas; and Kristine Angeli Sabillo, Inquirer.net

Amid transgender slay, Aquino thumbs down scrapping of VFA