US to produce Marine sought over murder of transgender Filipino 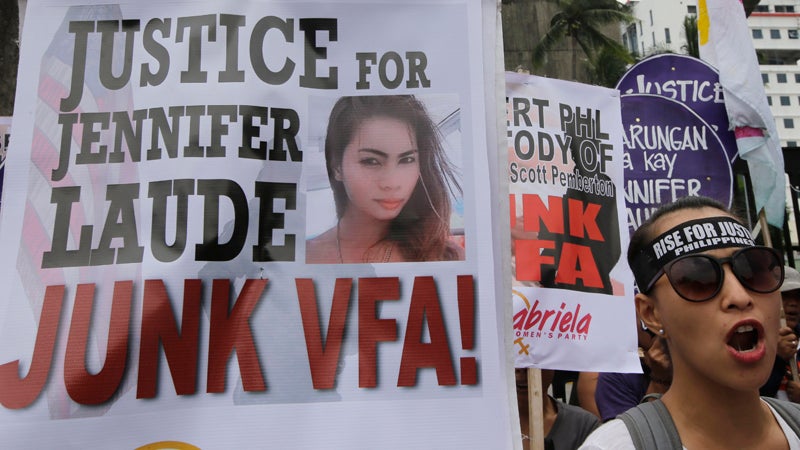 Protesters, mostly supporters of LGBT (Lesbians Gays Bisexuals and Transgenders) shout slogans during a rally at the Department of Foreign Affairs to demand justice for the killing of Filipino transgender Jeffrey “Jennifer” Laude with a U.S. Marine as a possible suspect Wednesday, Oct. 15, 2014 at suburban Pasay city, south of Manila, Philippines. The activists demanded that Washington hand over to the Philippines a Marine implicated in the killing of Laude which the demonstrators labeled a hate crime. (AP Photo/Bullit Marquez

MANILA, Philippines—The United States said Saturday it would comply with a Philippine prosecutor’s order to produce a murder suspect and four other US Marines in the investigation into the killing of a transgender Filipino sex worker.

The prosecutor ordered the five US Marines to give depositions at a formal hearing on Tuesday after police named one of them as a suspect in the October 11 hotel killing in the northern port of Olongapo.

“The United States will continue to assist in the investigation to help ensure justice is served,” US embassy spokeswoman Anna Richey said in an emailed response to AFP’s requests for comment.

“This will include making the suspect, witnesses, and any evidence gathered available to the Philippine authorities.”

Richey said the suspect was being held on board the USS Peleliu pending an investigation into the death of Jeffrey Laude, described by local police as a transgender sex worker.

The four other American marines sought by prosecutors were described by the Philippine foreign department Friday as witnesses.

The US Pacific Command earlier ordered the warship to remain at a port near Olongapo while the murder investigation was ongoing.

Police said they found the victim half-naked on the bathroom floor of a room with more than a dozen bruises, cuts and bite marks.

They said the victim, who had checked in with the suspect just over an hour earlier, had died from “asphyxia by drowning”.

Police and the prosecutor both named the suspect as Private First Class Joseph Scott Pemberton, attached to a North Carolina-based unit that had just taken part in joint military exercises in the Philippines.

Following the hearings, which could take days or weeks, the prosecutor can either bring criminal charges or drop the case. If Pemberton is charged with murder and convicted, he could face life in prison.

The Philippines has said that the politically charged case should not be allowed to derail longstanding defence ties between Manila and Washington, amid growing public pressure for Pemberton to be handed over into Philippines custody.

The killing occurred after the Philippines reached an agreement in March to allow its US military ally wider temporary access to Filipino military facilities.

American forces vacated large US military bases in the Philippines in 1992 as nationalist sentiment rose.

But Manila has sought closer defence ties in recent years in a bid to modernise its armed forces amid tense maritime disputes with China.