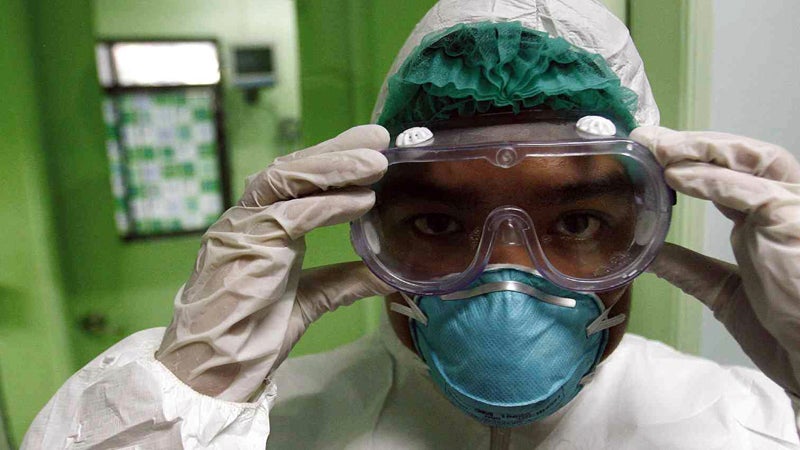 ALL EYES ON EBOLA A nurse adjusts his protective goggles in the isolation room for Ebola patients at the Lung Center of the Philippines in Quezon City. The health department said it would conduct specialized training programs for health workers to help them detect and treat the highly infectious disease. RAFFY LERMA

MANILA, Philippines—The Maritime Industry Authority (Marina) has placed on heightened alert all shipping firms and manning agencies as well as the nearly 400,000 Filipino seafarers deployed worldwide against the spread of the deadly Ebola virus, which has claimed nearly 4,500 lives, mostly in West Africa.

Citing an advisory issued by the Bureau of Quarantine, the Marina said all officers and crew members of international cargo ships and passenger vessels entering a Philippine port are required to submit a declaration of health saying they are Ebola-free.

The Marina said the officers and crew should “be properly screened through the use of a thermal gun and subjected to a physical examination.”

Thermal scanners will also be used by quarantine medical personnel in scanning passengers of international cruise ships before the vessels dock at Philippine ports, the Marina said.

The Marina, an attached agency of the Department of Transportation and Communications, reminded shipping companies to make sure that seamen are aware of the risks of Ebola, including the necessary precautions to take to prevent the further spread of the disease and how to mitigate the risks.

Both Marina and the Philippine Overseas Employment Administration earlier advised ship masters to avoid crew changes and to disallow seamen from availing themselves of shore leaves while calling on Ebola-affected ports.

Meanwhile, the Department of Health (DOH) will conduct a specialized training program for health workers nationwide in the detection, handling and treatment of cases of the deadly virus and prevent the spread of the disease in the country.

Health Secretary Enrique Ona yesterday said the training, which will be made in coordination of the World Health Organization (WHO), will start on Oct. 28.

“The knowledge and skills gained from the training is expected to increase the capacity of the national health system to prevent or respond if an imported case of Ebola in the Philippines occurs,” Ona said.

Experts from the WHO, the International Committee of the Red Cross, Medecins Sans Frontieres and the US Johns Hopkins University will train them on the proper use of protective clothing, handling of patients, contact-tracing and infection control, DOH spokesperson Lyndon Lee Suy said.

Twenty government hospitals will also be retrofitted to handle Ebola-stricken patients, with three to be designated specifically as treatment centers, Lee Suy said.

The government has also asked private hospitals to consider handling Ebola patients, he said. With a report from AFP