OLONGAPO CITY—Jeffrey “Jennifer” Laude was severely beaten before being killed allegedly by a US serviceman in a motel here, according to the police autopsy report released on Friday.

The report said Laude died from “asphyxia by drowning” and that the transgender woman’s body showed contusions and blood clots on the scalp, chest, arms and legs.

Laude had “cuts and bruising on (her) head and neck,” including a cut on her tongue, bruising around her eyes and cheekbones, and abrasions on her left forearm and right leg, said lead investigator SPO3 Tyrone Tecson in his report. He described the killing as a “crime of hatred,” and a result of “a sex service gone wrong” when the suspect, US Marine Pvt. 1st Class Joseph Scott Pemberton, “discovered that his sex partner was a gay (sic).”

The Department of Foreign Affairs (DFA) said the US Embassy had already received a copy of the subpoena and murder complaint against Pemberton that Olongapo City prosecutor Emelie Fe de los Santos and Eduardo de Vega of the DFA legal department handed to embassy officials Friday afternoon.

The subpoena requires Pemberton and four other US Marines who will serve as witnesses to appear for preliminary investigation on Tuesday, Oct. 21, DFA Assistant Secretary Charles Jose said. 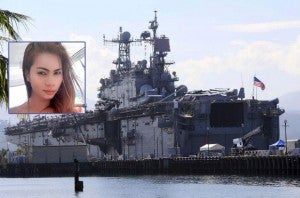 Kabataan party-list Rep. Terry Ridon called on the US military “to immediately show Pemberton to the public.”

“All we have is a verbal commitment from Washington. Pemberton must appear to the public as soon as possible. The Aquino administration—at the very least—should ensure this,” Ridon said.

But the preliminary investigation, with or without the suspect and the witnesses, at the Olongapo prosecutor’s office will commence next week, De los Santos said.

The autopsy and investigation reports were added to the murder complaint filed by Marilou Laude, the victim’s sister, at the Olongapo City prosecutor’s office on Oct. 15.

Laude was found dead by a motel employee at 11:45 p.m. on Oct. 11, a little over an hour after she checked in at the motel with Pemberton.

According to the investigation report, the motel room’s bed and pillows were arranged neatly and Laude’s belongings were untouched when forensic investigators arrived dawn of Oct. 12.

The motel employee who found the body testified that he saw Laude’s companion leave the room at 11:30 p.m. of Oct. 11, but the American had left the door ajar. He said he was about to clean the room when he saw a sandal outside the toilet. Thinking the room was still occupied, the employee said he closed the door and returned to his post. Fifteen minutes later, he returned to the room and found Laude’s body.

On Oct. 13, the police and a member of the US Naval Criminal Investigative Service ascertained Pemberton’s identity after several witnesses, including Laude’s friend “Barbie,” picked out his picture during a “photo-lineup process,” the report said.

On Wednesday, murder charges were filed against Pemberton who was seen leaving the bar with the 26-year-old transgender woman on the night of the killing.

The Criminal Investigation and Detection Group (CIDG) will be reviewing the complaint against Pemberton to make sure that the Philippine National Police has an “air tight case,” CIDG Chief Director Benjamin Magalong said, adding that PNP chief Director General Alan Purisima had ordered the Special Investigation Task Group formed to pursue the case.

The suspect is under US custody onboard the USS Peleliu docked at Subic Bay, as provided for by the Visiting Forces Agreement (VFA).

According to Article 5, paragraph 6 of the VFA, the custody of a US soldier facing criminal charges remains with US authorities “if they so request, from the commission of the offense until completion of all judicial proceedings.”

The Laude family’s lead lawyer, Harry Roque slammed the VFA and said that “Jennifer’s case proves that our sovereignty and jurisdiction mean nothing when a crime is committed by a foreigner in our country.”

Roque announced plans to storm the ship this weekend if the government fails to gain custody of the suspect. Laude’s sisters Marilou and Michelle said the family was prepared to lead the way to the ship to gain headway in Pemberton’s prosecution.

The US Pacific Command has ordered the USS Peleliu and other US naval ships to stay docked at Subic Bay while Filipino and American officials work out the terms for Pemberton’s prosecution.

But around 10 a.m. on Friday, the USS Germantown left the pier. “It’s OK with us as long as the USS Peleliu stays and Pemberton is still onboard,” said Laude’s sister, Marilou.

A battery of lawyers from the lesbians, gays, bisexuals and transsexuals (LGBT) sector will assist the Laude family in pursuing the case, according to Didin Tan of the Association of Transgender People of the Philippines, who went to Laude’s wake.

Malacañang assured Laude’s family that the “Philippine government (was) intent on pursuing justice for Jennifer Laude.”

In a text message, presidential spokesperson Abigail Valte said that VFA Commission head Eduardo Oban had said the Philippines will ask custody of Pemberton as soon as the case was filed in court.

“We have a standing agreement with the United States that in cases like these, the Philippines has criminal jurisdiction while the US has custody over the suspect … We also note that the provision of custody under the VFA has been upheld by the (Supreme Court) in the [Daniel] Smith case,” Valte said.

Smith, another US serviceman, was charged with rape by a Filipino woman in 2005 and detained at the Makati City jail for weeks, until he was spirited away by the US ambassador and kept at the US Embassy despite being convicted by a regional trial court. He was later released after the complainant recanted her testimony.

“The Aquino administration’s perfunctory handling of the case is evident. It has been a week, yet the government has yet to exert pressure on Washington to waive custody over Pemberton,” Ridon said.

Zarate and Bayan Muna Rep. Neri Colmenares filed House Bill No. 1842 that criminalizes social discrimination against lesbians, gays, bisexuals and transsexuals. The proposed measure, which is being discussed by a technical working group in the House of Representatives, is a first attempt to define LGBT in the country’s legal and social setting, Zarate said.

At present, the judicial process does not make any distinction between straight male/female orientations and the LGBT, which means that violent crimes involving this sector are rarely tried in the proper context in court, Bawayan said.   With reports from Nikko Dizon, DJ Yap, Julie Aurelio, Niña P. Calleja, and Vincent Cabreza, Inquirer Northern Luzon