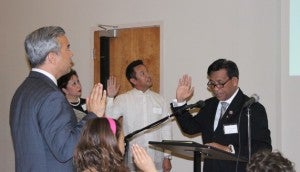 SAN FRANCISCO – A domestic violence prevention seminar and resources fair provided information and educational sources to women and their families at the Kalayaan Hall of the Philippine Center on October 2.

The Alliance for Community Empowerment (ALLICE) hosted its 10th Annual Free from Violence Seminar and Resource Fair in partnership with the Philippine Consulate General.

The event sought to increase awareness of the situation of women who are caught in abusive relationships. In her testimony, Giovanni Espiritu, abuse survivor, gave a tearful account of her experiences with various forms of abuse committed by people close to her and her struggle to find justice.

Assemblymember Rob Bonta stressed the importance of building healthy family relationships and teaching and showing the younger members of families the importance of respect. He also stated that laws are in place to protect the victims of domestic violence.

Honolulu night of kundiman to call out domestic violence