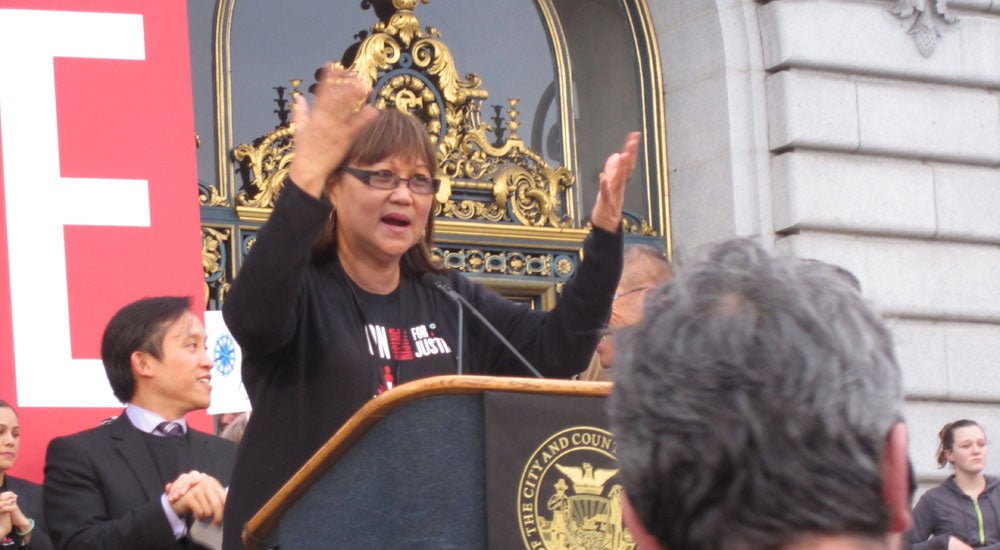 SAN FRANCISCO — A flash mob of hundred people danced in front of City Hall on Valentine’s Day as part of the global campaign to end violence against women and girls.

Marily Mondejar, FWN CEO, noted that after more than 10 years of calling attention to domestic violence within the Filipino community, Filipina women are now more aware of their rights. Mondejar said she and FWN were initially derided when the nonprofit began its advocacy.

“When we launched our ‘Filipinas against Violence’ campaign in 2003, many of our community members ostracized me and FWN for daring to talk about violence in our homes,” Mondejar said. She and her organization were criticized for speaking about what many Filipinos then believed was a “private matter.”

But times have changed. “There is now huge awareness among sexual violence victims that what happened to them is not their fault,” Mondejar said. “That they can seek help, they can demand justice and know that resources are available to them.”

Mary Benito, a physiology student at San Francisco State University came to join the flash mob. She said after she and her friends went to last year’s event, they decided to make it their Valentine’s Day tradition.

Benito said she grew up witnessing abuse at home. “I was always seeing my mom getting abused by my dad,” she said. She said her mother’s experience taught her a valuable lesson. “Whatever abusive relationship or friendship, you have you have to leave that,” said Benito.

Ronnie Ferrer, a Filipino national who works at the Philippine Consulate in San Francisco said violence against women in the Philippines is still a problem. 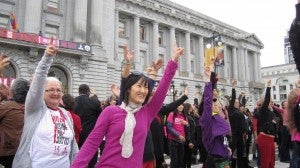 Filipino American superstar Apl.De.Ap of the Black Eyed Peas performed during the event.  He said he was unaware of violence against women in the Philippines, until he learned of the alarming number of women who were raped during the aftermath of Typhoon Haiyan.

One Billion Rising began on Valentine’s Day last year, launched by Eve Ensler, who created the “Vagina Monologues.” The name is based on a United Nations statistic that says one in three, or about one billion women will be raped or assaulted.