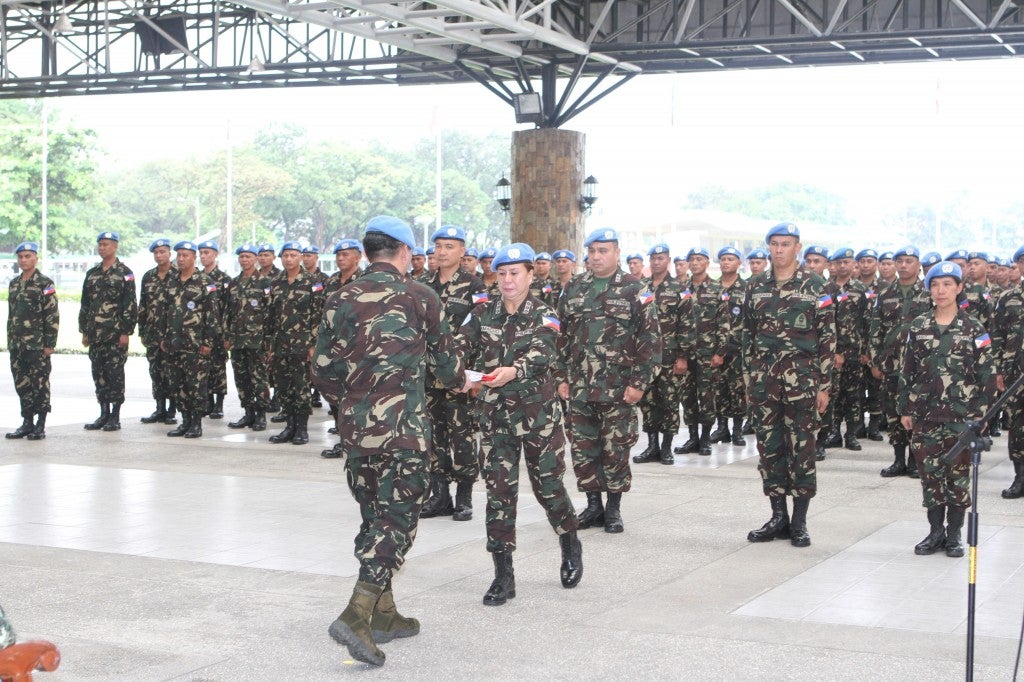 The Armed Forces of the Philippines on Wednesday welcomes home its UN Peacekeepers at Camp Aguinaldo after nearly a year of deployment in Haiti. / AFP PAO

MANILA, Philippines—The Philippine military on Wednesday welcomed home its UN Peacekeepers after nearly a year of deployment in Haiti.

“Thank you for leading our country’s representatives well. Your team has impressed upon all of us the message that what considerably counts is the caliber of our performance – what we leave behind to help those who needs our assistance,” Armed Forces of the Philippines Chief of Staff General Gregorio Catapang Jr. said in a speech.

Camacho, in an interview with reporters, said she didn’t have a hard time handling her contingent.

“As a senior military officer we should be firm in giving orders to our men,” she said.

Camacho also previously made history as the first female naval officer to command a Navy ship. Her experience at a sea mission qualified her to lead a UN contingent.

Do’s and don’ts while abroad

When deployed overseas, Philippine military troops have a list of do’s and don’ts to avoid embarrassing the country. Such is the case of Filipino UN peacekeepers when on duty.

“Kasi tayo may sistema dyan eh pagka on training or on duty may protocol if they go on passes (leave) controlled ang kanilang liberty gaya nung Israel they will have a guided tour,” Catapang told reporters on the sidelines.

Only over the weekend, a US Marine was suspected to have killed a Filipino transgender in Olongapo, while he was on furlough after participating in bilateral exercises between Filipino and US troops in Zambales.

“If they go on individual passes may buddy system and may cut off. May time na they will be accounted for or else we will start looking for them. Parang Cinderella ang mga sundalo natin hanggang 12 midnight lang,” he said.

“We maintain proper decorum even when we are on liberty or passes…Bago mag [passes] may don’ts and do’s and then i-remind lang wag mag commit ng misbehavior,” he also said.