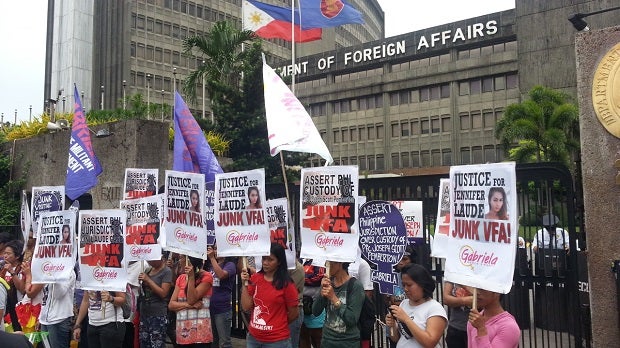 MANILA, Philippines—Closely watched over by white-uniformed security guards, blue-uniformed policemen, and military personnel in camouflage, a handful of protesters raised their voices before the Department of Foreign Affairs (DFA) Wednesday demanding justice for the slain transgender woman at the hands of a US Marine.

The protesters were composed of members of the womens’ rights group Gabriela.

An elderly mother with two small girls stood with the crowd holding a placard that said “Stop Edca negotiations.” But she doesn’t join in the group’s chants of “Junk VFA” and “Justice for Jennifer.”

The protesters tied black ribbons with the words “Rise for Justice” on the metal railings and gate of the DFA – all of which were promptly removed by the authorities less than an hour after the rallyists left.

The secretary general of Gabriela, Joms Salvador, is demanding that the DFA assert Philippine sovereignty amid the killing of, Jeffrey “Jennifer” Laude, by US Marine Private First Class Joseph Scott Pemberton in Olongapo city Saturday.

Pemberton has been detained on board the USS ship Peleliu since the alleged crime was committed. This was in accordance with Article V, Paragraph 6 of the Visiting Forces Agreement (VFA), the DFA has said.

The Philippines may request for the physical custody of Pemberton, but DFA spokesman Charles Jose said “there is no guarantee that they will grant it.”

Had Pemberton been arrested and detained by police, the US may request for custody. The request cannot be rejected by the Philippines, according to retired general Eduardo Oban Jr., executive director of the Presidential Commission on the Visiting Forces Agreement (VFA).

Salvador assailed the DFA’s “defeatism” and demanded to “hear a stronger, more forceful assertion” for the Philippines to get custody of Pemberton.

Mic Catuira, spokesperson for Migrante International and a transgender man, said that the VFA was the reason why American soldiers were allowed in the Philippines in the first place.

“Two cases have been highlighted so far, that of Daniel Smith and this one of Pemberton. But in Olongapo City, abuses from Americans are very common,” he said.

After more than 30 minutes of loud speeches using a megaphone and protest chants, the rallyists cleared the metal gates in front of the DFA leaving their black ribbons as they called for justice.
RELATED STORIES

Read Next
Discipline of Filipino peacekeepers hailed
EDITORS' PICK
Complete your early Christmas shopping with vivo V25 Series
The vivo Y16 makes the season of giving more thoughtful for the whole family
What’s in a name? ‘Maharlika’ evokes time of mythmaking
House energy committee chair Arroyo bats for cheap electricity
Easterlies to bring rain in PH on Sunday — Pagasa
China’s Xi unwilling to accept vaccines despite threat from protests — US intel
MOST READ
Maxene Magalona sees separation from Rob Mananquil as ‘blessing in disguise’: ‘There’s no more anger’
Are we ready for a sovereign wealth fund?
SC sets 2023 Bar exams on Sept. 17, 20, 24
What’s in a name? ‘Maharlika’ evokes time of mythmaking
Don't miss out on the latest news and information.