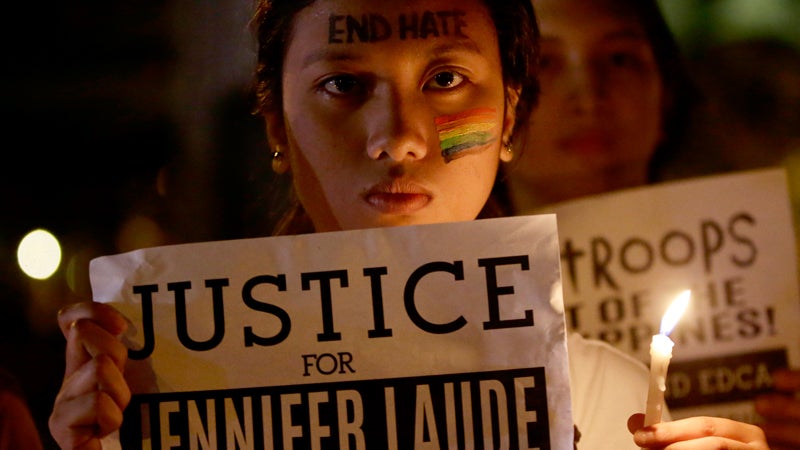 Protesters, mostly supporters of LGBT (Lesbians, Gays, Bisexuals and Transgenders), hold a lit candle and display messages to demand justice in the killing of a Filipino transgender Jeffrey “Jennifer” Laude, with a U.S. Marine as a possible suspect Tuesday, Oct. 14, 2014 in Manila, Philippines. AP

MANILA, Philippines – The US Marine tagged in the slaying of a 26-year-old transgender in Olongapo City should be turned over to Philippine authorities and detained in a local facility, Senator Miriam Defensor-Santiago said on Wednesday.

Santiago, who chairs the committee on foreign relations, pointed out that under the Visiting Forces Agreement between the United States and the Philippines, the Philippines has automatic jurisdiction over a suspect in a crime committed within its territory, once he or she has been identified.

In the case of Jeffrey “Jennifer” Laude, who was killed over the weekend, a witness allegedly identified the suspect as Private First Class Joseph Scott Pemberton, a US Marine of the 2nd Battalion 9th Marines assigned at West Pace Express.

Under the VFA, Santiago said, the Philippines should immediately acquire jurisdiction over Pemberton although she pointed out that under the same agreement, the US could immediately get custody of the suspect by making a request.

“VFA has a provision that even if jurisdiction belongs to the Philippines, if the US makes a request, just a request not even a supported request…automatically jurisdiction must be turned over to the US…” the senator said during a press conference.

While the same provision provides that the Philippines may also request to retain jurisdiction over the suspect, Santiago said, the request would not be granted immediately as the US would only give a so-called “full account” of the circumstances.

“What’s the meaning of full account and circumstances? Nobody knows,” she said.

“But I will insist that under the terms of the VFA itself properly negotiated between the two parties involved, automatically we acquire jurisdiction so kung hawak man nila yung (suspect), i-turn over nila sa NBI and detention should be in our Philippine detention facility,” said the senator.

Santiago also renewed her call to abrogate the VFA, citing among other things, the vagueness of many of its terms.

“What is visiting? How long is a visitor ? How long is the visit? What is this, a visit in galactic term?” she asked.

“We’re always on the wrong side of the law…and for me this is an opportunity to renew my call to abrogate the VFA…” she said.

To terminate the VFA , Santiago said the Philippines should only need to give the US a one-year notice.

US Marine held in slay of Subic transgender