AFP working on repatriation of PH Peacekeepers from Liberia

MANILA, Philippines—The Philippine Military are working on the repatriation of Philippine troops working as United Nations Peacekeepers from Liberia which has been stricken with the Ebola epidemic.

Lieutenant Colonel Harold Cabunoc, Armed Forces of the Philippines Public Affairs Office Chief, said the tentative date for the return of the 110 Peacekeepers is November 10. 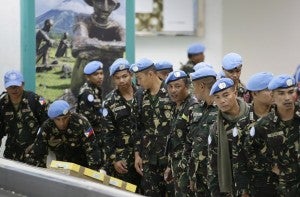 Philippine troops, who were deployed in the Golan Heights as U.N. Peacekeepers. AP FILE PHOTO

General Gregorio Pio Catapang said President Benigno Aquino III ordered the pull out of the troops from the West African nation which has suffered from the outbreak of the Ebola virus.

AFP’s chief said that there would be no heroes’ welcome for the contingent as they would have to go to a 21-day quarantine immediately after they land.

Cabunoc said that once the contingent finishes the 10-day quarantine, and they are declared safe, they would be given a break to have time with their families, after which they would report to the Philippine Air Force, the mother unit of the Liberia contingent.

“Proper protocols will be observed upon their return to our country,” Cabunoc said.

As of Tuesday, the AFP is searching for a suitable quarantine area with the suitable facilities thst could house the 110 Peacekeepers.