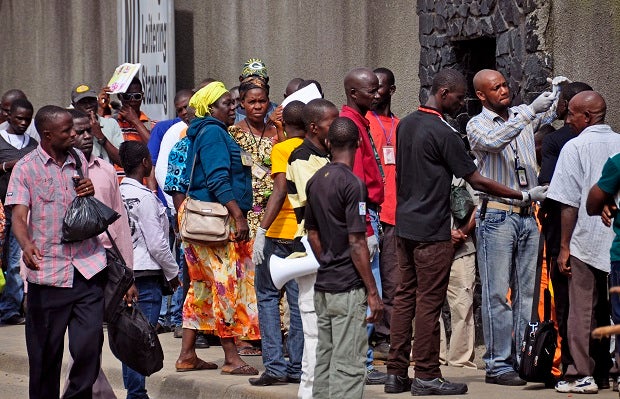 MANILA, Philippines—The thirty United Nations (UN) Peacekeepers from the Philippine National Police (PNP) in Ebola-stricken Liberia are “relatively safe and uninfected” by the disease, a police official confirmed on Tuesday.

“The PNP assures that its personnel in Liberia are following the Ebola Advisory (MIS-110/2014) from Abuja, Philippine Embassy and the Information Circular no. 2014/023 from UNMIL,” Sindac said in a statement.

The virus, which has no treatment yet, has killed 1,013 and affected 1,848 in the West African region according to the World Health Organization.

In the same statement, Chief Superintendent Alexander Ignacio, the PNP Director for Plans, said he directed the Contingent Commander to UN Mission in Liberia (UNMIL) to come up with a daily update on the health status of the 30 policemen.

“In the issued Ebola Advisory and Information Circular, peacekeeping members are advised to strictly observe the issued prevention guidelines such as avoiding direct physical contact with infected or deceased persons, washing hands frequently with soap and water and other basic precautionary actions,” Sindac said.

Sindac added that the PNP is in close coordination with the Department of Health (DOH) for the medical examination of the peacekeepers as they return to the Philippines in August.

No repatriation plan yet for Filipinos in Ebola-hit countries – DFA