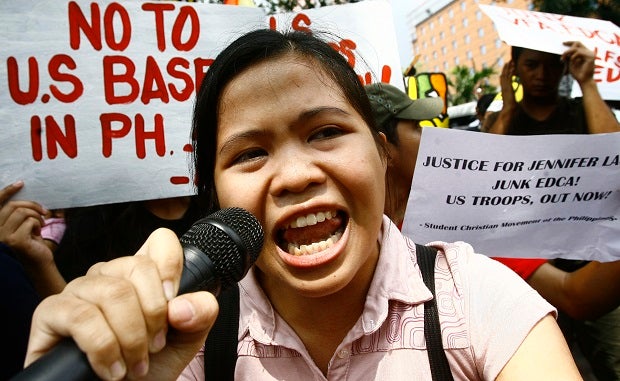 Members of the LGBT community, LFS , Gabriela and other cause-oriented group stage an indignation rally at the US Embassy. The groups condemned Tuesday the killing of the Filipino transgender Jaime “Jennifer” Laude and call on the government to assert the Philippine’s jurisdiction over the crime. JOAN BONDOC

MANILA, Philippines—In keeping custody of a murder suspect, the United States is “harboring” a criminal.

Noting a case all too familiar, Gabriela Women’s Alliance chair emerita Liza Maza had this to say about the continuing stay of US Marine Private First Class Joseph Scott Pemberton in American custody as Philippine authorities started investigating his alleged involvement in the death of Filipino transgender Jeffrey Laude at in Olongapo City on Saturday.

“It looks like the US is harboring the criminal. Just like before,” Maza told the Philippine Daily Inquirer when reached by phone on Tuesday.

“They know who he is, but no arrest has been made. Police are saying that investigation is ongoing, but I think that is all hogwash. This is a mockery of our justice system, of our investigation process,” she said on Tuesday.

Maza and her coalition of women’s groups, were active in calls for justice in the rape case that Filipino woman “Nicole” filed in 2005 against US Marine Lance Corporal Daniel Smith and three others.

Smith was not detained during the trial process, but was briefly held at the Makati City jail after being found guilty on Dec. 4, 2006. Through agreements between then Foreign Affairs Secretary Alberto Romulo and US Ambassador to the Philippines Kristie Kenney, he was whisked to the US Embassy late at night on Dec. 29, 2006 and held there while his conviction was on appeal.

In resolving a petition questioning the detention arrangement, the Supreme Court upheld the VFA as constitutional but ruled that agreements between Romulo and Kenney handing over Smith’s custody to the US Embassy after his conviction was “not in accordance” with the treaty.

The court then ordered Romulo to negotiate the detention arrangement with the US, observing status quo while talks were ongoing. Smith was, however, never returned to Philippine custody as he was eventually acquitted in April 2009, after the woman recanted her accusations. He was immediately flown back home.

“This early, I could already see what’s going to happen. This very much looks familiar,” said Maza.

She said the Olongapo murder was worse than the “Nicole” rape case as it involved the loss of life.

“Someone died here… Under the VFA (Visiting Forces Agreement), the Philippine government may ask for custody. Our government is really inutile,” said Maza.

The VFA is a Philippine-US pact that lays down terms covering the conduct of American forces while in the Philippines.

But Section 6 of the same article states that custody will remain with US authorities “if they so request, from the commission of the offense until completion of all judicial proceedings.”

EDCA is an agreement allowing greater US access to Philippine military facilities. Bayan, which believes the pact would allow the return of American bases here, is among petitioners questioning the constitutionality of the pact.

“EDCA will definitely multiply such cases since US troops will be allowed to base in our country. Their permanent presence will make our countrymen more vulnerable to abuse,” said Reyes.