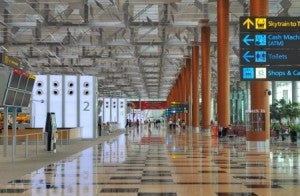 From Wednesday travelers arriving from countries with reported Ebola virus activity “will be directed to a screening station, where they will be screened for temperature and exposure to Ebola through a questionnaire,” the ministry said in a statement.

They will be asked to fill up a health declaration card that will include their contact details while in the city-state.

Those found to have a fever will be taken by ambulance to hospital for further assessment.

“Travelers who are well but who are identified as having possible exposure to Ebola virus infection will be quarantined or put under surveillance depending on the risk assessment,” it added.

The ministry said it had been “closely watching the Ebola situation, including developments in Spain and the United States” and “these show that an imported case and the potential for community exposure from imported cases cannot be ruled out.”

It was one of the countries severely hit by the Severe Acute Respiratory Syndrome outbreak in 2003, suffering 33 deaths.

The Ebola epidemic has killed more than 4,000 people this year, mostly in Guinea, Sierra Leone and Liberia.

A UN employee infected with the virus in West Africa has died after arriving in Germany last week for treatment.

In Dallas a nurse tested positive after caring for a Liberian Ebola patient. She is in isolation and said to be in stable condition.

In Spain a nurse who fell sick after caring for two missionaries with Ebola remains in a “very serious condition.”