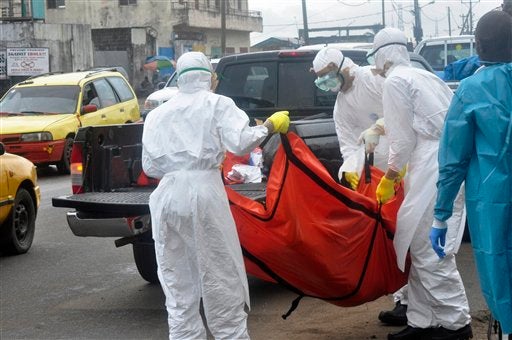 Health workers in protective gear carry the body of a person suspected to have died from Ebola on the street of Monrovia, Liberia. AP

MANILA, Philippines — Filipinos in Ebola-affected countries may decide to fly back to the Philippines if the outbreak worsens—a situation the government is preparing for, Malacañang said Tuesday.

Communications Secretary Herminio “Sonny” Coloma Jr. said the government should be prepared to accommodate the returning Filipinos and improve its quarantine and health facilities.

“Our government is fully committed and firmly determined to prevent the onset or spread of the Ebola virus disease, and is undertaking all the necessary precautions and preventive measures that will protect our citizens from this disease,” he said during a briefing.

Coloma noted that the crisis alert level for Liberia, Sierra Leone and Guinea will be raised to level 3 in mid-November this year. Level 3 means Filipinos working and living in those areas may be repatriated voluntarily.

(We are improving the facilities of the RITM or the Research Institute for Tropical Medicine in Muntinlupa City. And we are preparing the possible quarantine facilities to be used in the country.)

Coloma said the government is anticipating possible scenarios in the spread of the Ebola virus, which is characterized by flu-like symptoms and can result in death.

He said there is no direct flight from the three countries so a carrier heading to the Philippines could interact with many people, prompting authorities to study all possibilities.

For now, the Department of Health has been asking returning Filipinos for medical certificates and for a waiting time of 21 days before heading back to the Philippines.

Filipinos to be screened for Ebola outside PH