Filipinos to be screened for Ebola outside PH 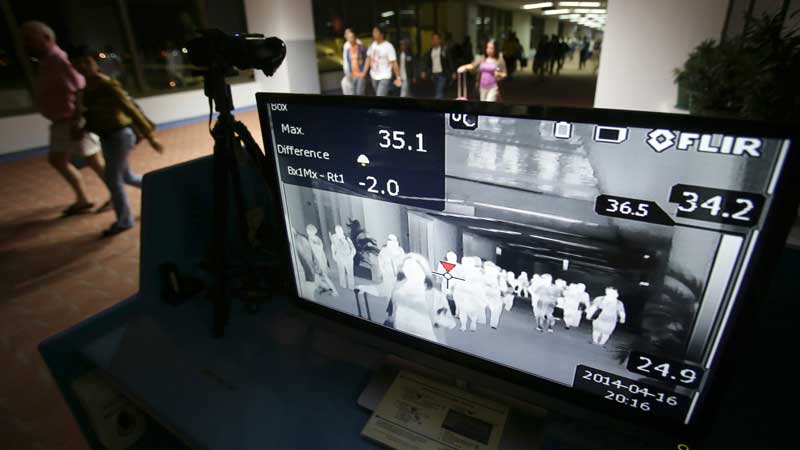 Passengers walk past a thermal scanner at the medical quarantine area at the arrival section of Manila’s International Airport in Paranaque. AP FILE PHOTO

MANILA, Philippines–The government has begun requiring a 21-day screening for Filipinos in Ebola-hit countries in West Africa before they would be allowed to travel to the Philippines, Health Secretary Enrique Ona said on Monday.

Once cleared, returning Filipinos will be covered by a “no regrets” policy requiring observation for another 21 days in the Philippines to make sure they had not contracted the deadly virus, he said.

During the second phase, Ona said Filipinos coming from Liberia, Guinea and Sierra Leone would be asked to inform local health authorities by cell phone of possible Ebola virus symptoms such as fever, severe headache, diarrhea and unexplained hemorrhage.

“Everything is being done to make sure that there would be no chance of a patient infected with Ebola coming to the Philippines,” he told reporters on the sidelines of a World Health Organization (WHO) regional forum in Pasay City.

There are more than 3,000 Filipino workers in Guinea, Liberia and Sierra Leone where there is “widespread transmission” of the Ebola Virus Disease.

Speaking at the WHO forum, President Aquino sounded the alarm on Ebola and the Middle East Respiratory Syndrome-Corona Virus (MERS-CoV), saying “the fact that we have 10 million of our countrymen living and working abroad makes these kinds of outbreaks a paramount concern.”

“Among the questions we need to keep asking ourselves are: How can we best educate our countrymen about these outbreaks, without spreading fear and panic? Is there an efficient and safe way to monitor our countrymen’s exposure to diseases, and to repatriate them, while ensuring their health, as well as that of the general populace?” he said.

“I speak for myself and my government when I say that we will continue to exert every effort and undertake all possible initiatives to find answers to these questions and keep our countrymen safe and healthy as pandemics threaten to spread.”

Ahmad said Cameron wrote a letter to Aquino conveying his request amid the health crisis in West Africa that has claimed 4,000 lives.

To help health workers in the detection, prevention and treatment of these diseases, the Department of Health is upgrading the biosafety level (BSL) of the Research Institute for Tropical Medicine (RITM).

“We are increasing the BSL of the RITM, from its current BSL 2 to BSL 3 or even 4. A BSL 3 facility is able to contain severe and lethal pathogens and prevent its spread outside the facility,” Ona told reporters, noting that a BSL 4 facility can contain lethal and infectious diseases that has no treatment or vaccine available yet.

The upgrade will cost roughly P500 million to P600 million, he said.–With a report from Christine O. Avendaño