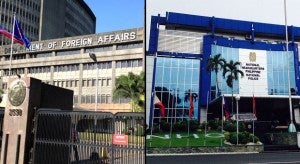 MANILA, Philippines – The family of a Filipino transgender who was allegedly killed on Saturday by a US Marine assailed the slow government response on the case.

(The action is slow. No one from DFA [Department of Foreign Affairs] has talked to us. It’s only the PNP [Philippine National Police].)

Laude was found dead inside the toilet of one of the rooms of Celzone Lodge in Olongapo City on Saturday night after he checked in with a foreigner described as “white, male”. Later reports identified the alleged perpetrator as a US Marine.

While investigators are still establishing the motive behind the killing, his family hopes for justice and a fair trial.

(There is nothing we want but justice for our sibling.)

Laude’s sister lamented that even the police, who are coordinating with them, did not have the full report.

(We still don’t know the cause of his death. It’s taking them time to resolve the case.)

On Saturday, Laude together with the male foreigner checked in at the Celzone Lodge at 11:30 p.m.
The foreigner, however, left the hotel a few minutes after without settling their bill, prompting a room attendant to check the room but found Laude lifeless on the bathroom floor.

In 2005, US Marine Lance Corporal Daniel Smith was accused of raping a Filipina in Subic Bay and was convicted by a lower court to 40 years imprisonment but an appeals court reversed the verdict after the victim retracted her statement.

US ships held back amid Filipino’s killing

US Marine held in slay of Subic transgender