US ships held back amid Filipino’s killing 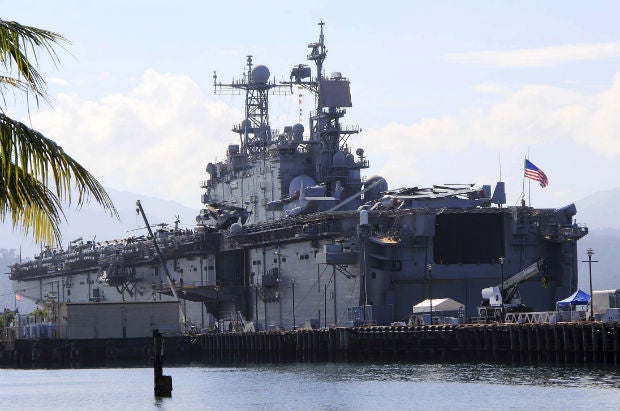 The amphibious assault ship USS Peleliu which took part in the joint military exercise with their Philippine counterpart is docked at the Alava pier, off Subic Bay Freeport zone in Zambales province in northwestern Philippines Monday, Oct. 13, 2014. Eduardo Oban Jr., former Philippine armed forces chief and now head of the Visiting Forces Agreement Commission which is tasked to paving the way for hundreds of U.S. forces to hold combat exercises with Filipino troops in the south, told the media Monday that US Pacific Command Chief Adm. Samuel Locklear allegedly ordered the USS Peleliu and other US ships not to leave the pier until the investigation is done as to the involvement of a “foreigner” in the killing two days ago of a transgender at Olongapo city, in northwestern Philippines, which houses a former US naval base off Subic Bay. AP

MANILA, Philippines–Foreign Secretary Albert del Rosario on Monday said the Philippine National Police was investigating the possible involvement of a US Marine, who participated in recent joint military exercises, in Saturday’s killing of a Filipino transgender in Olongapo City.

Both Del Rosario and Visiting Forces Agreement (VFA) Commission Executive Director Eduardo Oban said the US Pacific Command under Adm. Samuel Locklear III had stopped two of its warships from leaving the country pending a police investigation into the killing.

Del Rosario confirmed the US ships now at Subic would not leave “until there is clarity to the situation since this is tragic.”

About 3,500 US Marines and navymen took part in the 10-day joint exercises held in several areas in the country, including training sites near Olongapo. The ships carrying the US troops were scheduled to leave Wednesday.

Del Rosario explained that the Philippines would have jurisdiction over the suspect even if he is a US serviceman.

“The matter of custody in the normal course of events, the US will have custody, but in case of heinous crimes, we can ask them to waive custody. So I supposed that it will go in that direction,” he said.

On the possibility that PH-US relations might be affected considering there would be some quarters who would oppose US jurisdiction, Del Rosario said the case, if ever, would be an “opportunity for us to have the public appreciate the VFA’s worth” and that this pact was mutually beneficial to both countries.

In 2005, US Marine Lance Corporal Daniel Smith was accused of raping a Filipino woman in Subic Bay. He was convicted by a lower court and sentenced to 40 years but an appeals court reversed the verdict after the woman recanted her statement.

Adm. Locklear has ordered the USS Peleliu and another warship to remain in the former US base of Subic Bay until after the murder investigation is over, Oban said.

A police report said the 26-year-old victim, Jeffrey Laude, was found strangled on Saturday night in a hotel room toilet in Olongapo City.

The US Embassy in Manila confirmed that an American serviceman was “identified as a possible suspect.” “The United States will continue to fully cooperate with Philippine law enforcement authorities in every aspect of the investigation,” the embassy said.

According to witnesses, Laude checked in at the Celzone Lodge with a “male, white foreigner” sporting a Marine-style haircut at 11:30 p.m. Saturday.

They found Laude, who was dressed as a woman, lifeless on the bathroom floor with marks on the neck, she added.

Mayor Rolen Paulino said the police were coordinating with the US Naval Criminal Investigation Service and were expected to bring a witness to identify the sailor on board the amphibious assault ship, USS Peleliu.

“We received information that four members of the US Marines are being held on the Peleliu,” Paulino told the Inquirer.

US Pacific Command: No American ships will leave PH