PH to send help, but not health workers to Ebola-hit nations | Global News 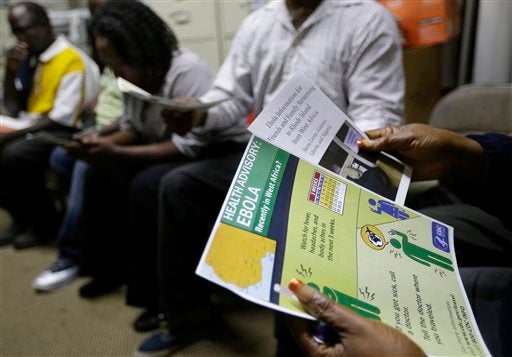 In this Wednesday, Oct. 8, 2014 photo, Araminta McIntosh, of Providence, R.I., hands only at right, holds informational flyers on Ebola during a meeting of the Liberian Community Association of Rhode Island, in Providence, R.I. AP FILE PHOTO

MANILA, Philippines — With reports of the Ebola virus reaching Spain and the United States, the Philippine government on Monday said it is willing to send material assistance but not health workers to West Africa.

“This is a global concern,” Health Secretary Enrique Ona said in Filipino at the sidelines of a World Health Organization (WHO) session in Pasay City. However, he said it is not that easy to decide and send health workers to aide Ebola-hit countries.

“Of course we will study that…We will be helping through other ways. But we have yet to decide on what kind of help,” he told reporters.

Last month, Malacañang said it was not yet ready to send health workers to help contain the outbreak in West Africa.

Communications Secretary Herminio Coloma Jr. said they first had to address other pressing issues such as the situation of Filipino peacekeepers in the region.

The Ebola virus is a severe and often fatal illness with flu-like symptoms. With the death toll breaching the 4,000 mark this month, infected patients remain in peril with the absence of a licensed vaccine or cure.

Ebola: How it spreads