Insights from a San Francisco sabbatical 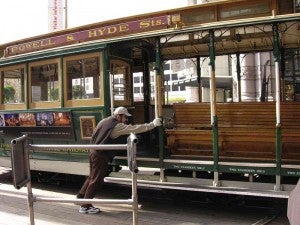 The girls club composed mainly of Filipino mothers and children embarked on a San Francisco cable car ride in order to celebrate the Christmas season. During the short trip, children together with some of their parents sang Christmas carols on board. The innocent voices of children wafted through the cold December air as they sang familiar tunes until dusk.

The experience for some was close to magical. The cable car ride ended serendipitously at the Fisherman’s Wharf.

It is one of the ways that Filipinos have introduced the Christian spirit in the community. Without Filipinos, such lengthy yuletide celebrations that start around September would not exist.

For many mainstream Americans, the November celebration of Thanksgiving is given more importance. It also brings with it the Day after Thanksgiving sale event that many people look forward to.

When it comes to food, there is usually no problem finding basic Filipino ingredients.

Certain places like Daly City and Union City have many Filipino residents that you are likely to find familiar restaurants such as Jollibee. There are also smaller carinderia-type establishments where some residents get their daily food fare.

In a fast-paced environment, takeout food is the next best thing. The Pinoy network is also alive in these areas. Instead of heading to the mall for a haircut, for example, you may just end up at a family friend’s house where he or she cuts hair for a living (inside the house and usually done discreetly). Or if you are looking for a room to rent, the hospitality of a Filipino stranger is not hard to find.

Describing the Filipino spirit is like trying to fit too many goodies into one small balikbayan box. There aren’t enough words that can fully describe Filipinos in general.

Unlike the Chinese that tend to group together (probably explains Chinatown in many cities), Filipinos (with reference to Pinoys who immigrated to the United States as opposed to those who were already born there) stick to their own turfs and there are some who have been described with crab mentality.

After all, it has been said that some undocumented Filipinos were turned in by their fellow kababayan. However, many are also well-liked because they tend to blend in rather than stick out.

Many Asian Americans, including Filipinos, have achieved positions of power and wealth in San Francisco. Dado Banatao is a prime example of a successful venture capitalist Filipino in the Bay Area.

There are immigrants who have moved to the US with their families and have managed to integrate more easily into society, especially if they came at a young age. One Filipino couple moved to the US in order to pursue postgraduate studies at the University of San Francisco.

It is in this school where they met and eventually got married. Aside from their professional careers, they had been involved in promoting Filipino cultural activities in the area. They mingle with friends from various backgrounds.

For those who migrated during the boom years of the ’80s and ’90s, some more mature Filipinos have managed to gain wealth simply by taking advantage of rising property values.

There are others who got rich by finding employment in the health care sector, particularly the nursing profession.

Over the years, there have been efforts to limit the hiring of nurses outside the US, as a means to protect American jobs. Nonetheless, those who came in ahead had much to gain.

For the materially successful Filipino, the American lifestyle has provided first world comforts that include travel and mobility. You may hear that a friend’s mother or grandmother now sports a BMW and travels (or rather joins a cruise) on a whim.

However, not all versions of finding the American dream have happy endings.

A Filipina nurse shared the story of a friend. Her Filipina friend married an American and gained wealth through real estate.

At their prime, the couple spent their money to the hilt, that included hosting favorite friends at big hotels when they felt liked it.

When the husband died, the Filipina lost much of her wealth. Eventually, she found herself bunking from one house to another—not even her own kin could substantially help her out. She has since died penniless.

Aside from the predominantly Catholic faith that teaches compassion for others, the Filipino’s original strength lies in the family. Perhaps, this explains why old people in the Philippines are usually cared for (and not sent to a retirement home) until death.

Thus, it is no wonder that when families are forgotten, separated, or taken apart, individual lives tend to be shattered.

Immigrants, as well as those left behind, are most vulnerable to these changes. The social effects of migration are often unspoken, but actually have the greatest impact on an immigrant’s life.

“The family can also be likened to a hanging mobile. Take out one piece and it is no longer the same. It has to find a new equilibrium.” –From the book “Nawala ang Ilaw ng Tahanan” by Carandang et al.