Aquino to fly to Bali for democracy forum | Global News

Aquino to fly to Bali for democracy forum

BALI, Indonesia —President Benigno Aquino III will stay here overnight to attend the Bali Democracy Forum on Friday and receive an award the Indonesian government had conferred mostly to members of the royalty of other countries.

Coming here as the son of two democracy icons of the Philippines and its head of state, Aquino will co-chair the two-day Bali Democracy Forum with Indonesian President Susilo Bambang Yudhoyono and deliver a speech before high-level representatives from 51 participant countries as well as 68 international observers.

He is expected to arrive here in Nusa Dua, Bali, at 8 p.m. on Thursday a day ahead of the two-day forum in Bali International Convention Center on October 10 to 11 where he will be joined by two other heads of states. Timor-Leste’s Kay Rala Xanana Gusmao and Brunei Darussalam’s Sultan Haji Hassanal Bolkiah are also expected to deliver their remarks.

This will be Yudhoyono’s last forum before president-elect Joko Widodo assumes office this month and leads the world’s most populous Muslim nation.

While Yudhoyono started the forum in 2008 with the primary aim of fostering dialogue-based cooperation through experiences and best democratic practices in the Asia-Pacific region, the event is presently beset by controversies as civil society groups of this country have announced their move to boycott it.

Protests around Nusa Dua area where the democracy forum will be held, have been banned by the Indonesian authorities, according to a news report in Jakarta Post.

Philippine Ambassador to Indonesia Maria Rosario Aguinaldo has described Aquino’s participation in the forum as important to the Philippines. 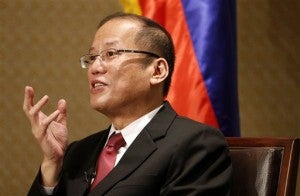 “(Aquino) is the son of two icons of democracy and he himself has proven to be a person pursuing the democratization process… in a way that we have not seen before,” Aguinaldo said in an interview.

She noted that the President’s attendance in the forum along with its existing bilateral agreements would be proof of the Philippines and Indonesia’s “close and warm relations.”

More so, at the sidelines of the forum, the Indonesian government will confer upon Aquino its highest award the “Bintang Republik Indonesia Adipurna (Star of the Republic of Indonesia)”

The award is given to those who have rendered extraordinary service to Indonesia and the foreign heads of states who had received the award are mostly royalty, according to Aguinaldo.

“The award has been given to the Queen of England, to Queen of the Netherlands, the King of Thailand, the two Sultans of Malaysia, the first King of Bahrain, and Sultan of Oman. This is the first time a Filipino is receiving the award,” the ambassador said.

Two Filipinos, former Foreign Secretaries Narciso Ramos and Carlos P. Romulo, in the past had received the second highest award.

Just last May, the Indonesia’s president was the recipient of the Order of Sikatuna Rank of Raja, the highest diplomatic award given by the Philippines to visiting leaders.

The bilateral relations between the Philippines and its neighbor, which date back to 1949, have been strengthened by agreements covering a wide range of areas such as defense and security and trade and investments.

Indonesia has been the country’s close ally. In fact, Aquino, as president, has visited Indonesia five times in three years, Aguinaldo said.

During the state visit of the Indonesian president in May, Aquino called him “uncle,” saying he had learned a lot from the man’s wisdom.

Yudhoyono will step down in 10 days and be replaced by Widodo who was widely believed as the person to usher in changes in the political landscape of this country.

Organizers said the Indonesian president-elect would likely not attend the forum since he was not in any way part of the program.

Aquino will be back in Manila on Friday night. With Kristine Sabillo, INQUIRER.net