This was the call of environmental and health groups on Thursday, as they decried government for allegedly allowing the unlawful disposal of toxic waste from Canada in the Philippines, instead of shipping it back in accordance with international laws.

On Thursday, groups led by Greenpeace, Ecowaste Coalition, Ban Toxics and the Ang Nars partylist held a press conference at the Quezon City Memorial Circle (QCMC), exposing what they called as government plans to simply dump in a Tarlac landfill the shipment of garbage intercepted by the Bureau of Customs earlier in 2014.

Late in 2013, 50 forty-foot container vans from Ontario-based Chronic Inc. started arriving at the Manila International Container Port for consignee Chronic Plastics based in Valenzuela city. The contents of the container vans were declared as “scrap plastic materials for recycling.” 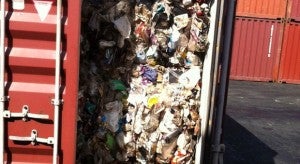 This photo posted on the online petition on Change.org shows a container van full of hazardous waste that is being held by the Bureau of Custom in the Port of Manila. The petition urges the Canadian government to take back the shipment of 50 container vans full of waste. PHOTO/ CHANGE.ORG PETITION

In January, the Bureau of Customs (BOC) confiscated the container vans after discovering that they actually contained possibly hazardous wastes such as used plastic bags, used bottles, newspaper, household garbage, and even adult diapers.

In February, the BoC filed a complaint in the Department of Justice against Chronic Plastics, saying the shipment violated the Toxic Substances and Hazardous and Nuclear Waste and Control Act of 1990, and the Basel Convention On The Control Of Transboundary Movements Of Hazardous Waste And Their Disposal, to which both the Philippines and Canada are signatories.

Under the Basel convention, the “exporting country must take back the waste materials if the receiving country refuses to accept them.” Environmental groups have since urged that the container vans simply be shipped back to Canada as per the international treaty.

But 459 days after the first shipment of wastes to the Philippines, a bulk of the container vans and their waste contents remain in the vicinity of the Bureau of Customs in Manila, according to Abigail Aguilar, toxics campaigner of Greenpeace Southeast Asia.

Last Aug. 30, to decongest the Manila ports, 16 of the vans were shipped to the Subic International Container Terminal Services, which immediately requested that the Manila port take them back as there were already “big holes in the vans leaking and emitting a foul odor,” Aguilar said.

On Thursday, the advocate groups said that in a meeting in August, held by the BoC, the environment department, and the foreign affairs department, one of the recommended actions on the toxic wastes was to “permanently dispose of them in Philippine soil,” in particular, in a sanitary landfill in Tarlac province, Aguilar said.

Aguilar said this was discovered by the groups in September, when Ang Nars Rep. Leah Paquiz received word from the Environmental Management Bureau about the agreements in the interagency government meeting.

“I will not tolerate this matter sitting down. As a legislator, I filed for a congressional inquiry in aid of legislation the unlawful importation of the 50 container vans filled with garbage. Clearly, this [dumping of waste in our country] is a reflection of our dignity as a nation,” said Paquiz in a statement.

Von Hernandez, president of the EcoWaste Coalition and executive director of Greenpeace Southeast Asia, said the planned move would set a “wrong precedent.”

“This government proposal sends a signal to unscrupulous and illegal waste traders to ship their unwanted junk to the Philippines. There can be no compromises here. This garbage shipment must be sent back to Canada, its country of origin. The Philippine government must do everything it can to prevent these incidents from happening ever again in the future,” Hernandez said.

“Why our government is even contemplating on accepting these illegal wastes when international law is behind us is exasperating,” noted lawyer Richard Gutierrez, executive director of BAN Toxics.

In April, the groups launched an online petition on change.org urging the Canadian embassy in the Philippines to facilitate the return of the garbage back to Canadian soil. As of press time, the petition has garnered 23,631 supporters.

Canadians back PH plea to take back waste