Preparing for Pope who says, ‘Pray for me’ 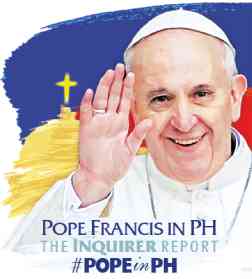 Starting at noon Tuesday, readers and viewers can post their prayer intentions on INQUIRER.net—part of the Inquirer Group’s comprehensive preparations for the historic pastoral visit of Pope Francis to the Philippines next January.

The interactive feature is one of many highlights in the Inquirer’s multiplatform effort to cover the papal visit.

But the primary promise of “Pope Francis in PH: The Inquirer Report” is to offer the most comprehensive coverage of the fourth papal visit in Philippine history and the first in 20 years.

Content on other Inquirer platforms will be consolidated with the help of the hashtag #PopeinPH.

A series of special articles in the Philippine Daily Inquirer will set the report’s agenda, and blanket coverage during the five days of the Pope’s visit, with the deployment of 40-plus reporters and 80-plus correspondents for the Inquirer newspapers, will set its pace. Inquirer Libre will add to the number with a small army of student volunteers.

A special site on Inquirer.Net will feature new content every day (starting with short reflections on Evangelii Gaudium, Pope Francis’ lengthy signature document that some Vaticanistas have called the road map to his papacy) as well as carefully chosen archival material (including Inquirer reportage on and immediately after the papal conclave, plus editorials and columns analyzing the so-called Francis effect).

More material and multimedia content will be added according to schedule.

The prayer feature to be activated Tuesday to mark the Inquirer’s 100-day countdown to the papal visit was inspired by Francis’ closing words to the massive crowd that thronged St. Peter’s Square on the day he became Pope, on March 13, 2013: “Before the bishop blesses his people, he asks that you pray to the Lord to bless me.”

A year later, on the anniversary of his election as the 266th Bishop of Rome, Pope Francis tweeted (on his official Twitter account @Pontifex): “Please pray for me.”

A form on the Inquirer.Net special site allows the reader to post both prayers for the Pope and personal intentions.

After vetting, the prayers will be posted online and eventually collated next January for presentation to the Catholic Bishops’ Conference of the Philippines. (The special site’s URL will be revealed at noon Tuesday.)

Other Inquirer platforms are gearing up for the papal visit.

Anjo Mendoza, president of Megamobile, said the Inquirer Group’s mobile venture was working on a version of a “pope app” and an electronic biography of Pope Francis.

“The biography mixes a strongly visual approach with the Pope’s own words,” he said.

Eileen Mangubat, publisher of Cebu Daily News, noted the special significance of the date of the papal visit. “Cebuanos will be doubly excited because the Pope’s visit falls on the eve of the annual Sto. Niño fiesta. Cebu Daily News, which does special coverage every January of the religious feast and Sinulog merrymaking, will cover both milestones.”

“Bandera will be featuring a weekly feature on the Pope’s life, his work and mission,” said Dona Policar, editor in chief of Bandera, a leading tabloid in the Visayas and Mindanao.

“And for those who live by the numbers, Bandera will regularly feature the Pope’s numbers—all figures related to his life and mission,” she said.

“Primary content will be info about the Pope,” he said.

Pope Francis will arrive in Manila from Colombo, Sri Lanka, on Thursday, Jan. 15, and return to Rome on Monday, Jan. 19.

His official schedule has not yet been made public, except for the daylong visit to Tacloban City on Saturday, Jan. 17.

As the detailed schedule becomes available, the contours of The Inquirer Report will take new shape.

‘No tickets’ for Pope Francis visit to PH