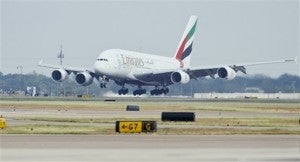 MANILA, Philippines — The world’s largest passenger jet is flying to Manila on Tuesday night on a one-off commercial flight by Emirates Airline to mark its move to the newly rehabilitated Terminal 3 of the Ninoy Aquino International Airport.

In an advisory, the Dubai-based air carrier said its Airbus A380 will touch down at the NAIA at 9 p.m. on Tuesday and berth at Terminal 3.

Emirates will make that flight from the Dubai International Airport with the A380 only once. The plane is to fly back to Dubai shortly after at 1 a.m. on Wednesday.

“The main objective of the A380 one-off trip to Manila is to mark the move of the Emirates Airline to the Terminal 3 and show its commitment to the Philippines since 1990,” Emirates said in a statement.

In August this year, Emirates transferred its operations to the NAIA Terminal 3 from its previous home at the congested NAIA Terminal 1.

Other international carriers such as Delta Airlines, KLM Royal Dutch Airlines, Singapore Airlines and Cathay Pacific also moved to Terminal 3 when it went into full operation.

The completion of the NAIA 3 rehabilitation had been delayed for a decade by legal issues.

Emirates officials said President Aquino and Vice President Jejomar Binay were expected to attend the ceremony at the NAIA 3 and witness the arrival of the aircraft on Tuesday night.

No international airline uses the A380, by far the largest passenger plane, on flights to and from Manila.

With two full-length decks measuring a total of 6,000 square feet, the A380 is 50 percent bigger than the Boeing 747 and is widely considered a the solution to the common problems of rising number of plane passengers and congested tarmacs.

Since it began to fly commercially seven years ago, it will be the first time the biggest passenger jet will be making its first touchdown at the NAIA.

Emirates suspends flights to Clark due to jet fuel taxes

ONE: Adiwang knocks out Japanese foe