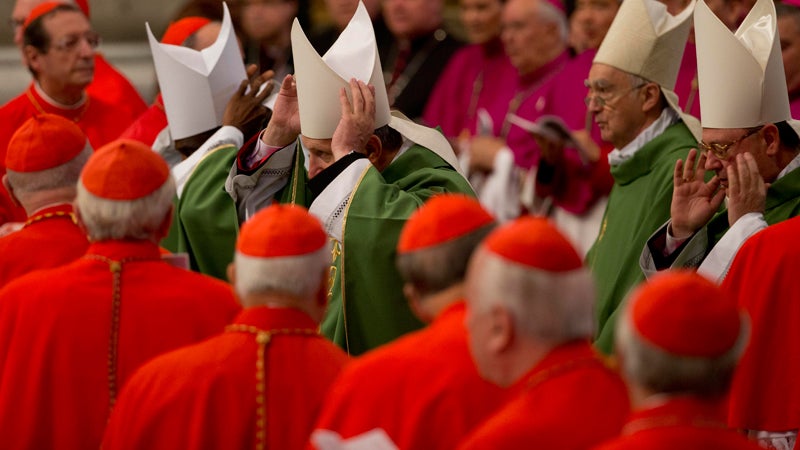 Cardinals and bishops arrive to a Mass celebrated by Pope Francis in St. Peter’s Basilica at the Vatican, Sunday, Oct. 5, 2014 to open the extraordinary synod on the family. Pope Francis on Sunday issued a strong signal of support for reform of the Catholic Church’s approach to marriage, cohabitation and divorce as bishops began a landmark review of teaching on the family. AP PHOTO/ALESSANDRA TARANTINO

VATICAN CITY–Pope Francis on Sunday issued a strong signal of support for reform of the Catholic Church’s approach to marriage, cohabitation and divorce as bishops began a landmark review of teaching on the family.

Opening an extraordinary synod of nearly 200 senior clerics, Francis suggested the Church must address the present gulf between what it currently says on these issues and what tens of millions of believers actually do.

Thorny theological questions such as whether divorced and remarried believers should be able to receive communion will dominate two weeks of closed-door discussions set to pit conservative clerics against reformists led by German cardinal Walter Kasper.

Vatican insiders say Kasper has the backing of Francis but that the pontiff wants consensus for any change.

That stance was reflected in the sermon the pontiff delivered at the synod’s opening Mass.

In it, he urged bishops to be generous in understanding the problems faced by ordinary believers trying to live within the rules of the church.

Pointedly, he invoked a passage from the gospel of Matthew which admonishes “evil pastors (who) lay intolerable burdens on the shoulders of others which they themselves do not lift a finger to move.”

He added: “Synod Assemblies are not meant to discuss beautiful and clever ideas, or to see who is more intelligent.

“They are meant to better nurture and tend the Lord’s vineyard…. In this case the Lord is asking us to care for the family.”

Since becoming pontiff just over 18 months ago, Francis has repeatedly urged the Church to tend to the “wounds” caused by family breakdown rather than seeking to exclude or judge the many divorced people, cohabiting couples and single mothers within its ranks.

He has underlined that stance by personally marrying couples who had lived together “in sin” prior to their weddings and by baptizing a child born to parents married outside of the Church.

Francis’s reforming instincts have already been demonstrated in the steps he has taken to overhaul the way the Vatican bank and administration are run and the strong signals he has issued about the determination of the Church to deal with the issue of clerical sex abuse.

But updating the Church’s approach to social issues is seen as a tougher challenge.

Conservatives in the Vatican hierarchy have vowed to fight any dilution of traditional doctrine.

The Church’s view of marriage has come to be seen as outdated by many in a world where, in some developed countries, nearly one in two marriages ends in divorce and where the notion of the institution itself has been challenged by the global trend toward the legalization of same-sex weddings.

The bishops gathered in Rome are certainly not about to embrace gay marriage, and few Vatican observers expect much, if any, change on questions such as contraception, another area where Catholic teaching contrasts with the daily practice of millions.

But with Francis on the side of reform, the feeling is that the synod process could lead to change when it finally reaches conclusions expected in 2016.

The most notable of these could be a change in the rules to make it possible for Catholics who divorce and then remarry to receive communion.

That has been banned for centuries. But critics say the Church’s stance is hard to defend given that individuals who have declared their repentance from more serious breaches of the Christian code, such as murder, can take communion.

While the Church may not yet be ready to take a step that would amount to a de facto acceptance of divorce in certain circumstances, the discussions could result in steps to make it easier for failed marriages to be annulled.

Another area in which the Church could send out a signal of compassion is by making it clear that priests should be ready to baptize the children of same sex couples, regardless of the doctrinal disapproval of their parents’ union.

Other issues due to be addressed include the role of easily available pornography in family breakdown and the Church’s attitude to individuals in polygamous unions.–Angus Mackinnon, Jean-Louis de la Vaissiere