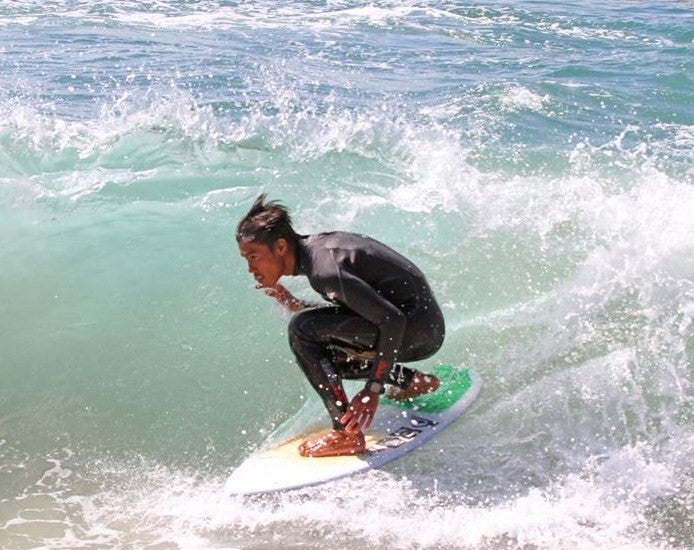 LAS VEGAS, Nevada – Two Filipino surfers, a Samareno and Cebuano, qualified for the quarterfinals in the 10th Oktobertfest skimboarding championships near the Balboa Pier in Newport Beach, California, after topping their respective heats on Saturday, October 4.

Roderick “Manoy” Bazar and Arjun Jimenez, exploiting the unexpectedly warm waters off the Southern California coast, displayed tricks that impressed the judges to emerge the best in the morning heats and move to the next round Sunday in the professional division.

With waves four to six feet high and temperatures in the upper 60s, the surfers were able to show their stuff and gave some stiff competition.

“It was better than last year when the water was too cold,” said Bazar, who learned the sport in his hometown in Borongan, Eastern Samar at a barangay near the Pacific Ocean.

Bazar reached the quarterfinals last year in the professional divisions, in which more than 50 pros from all over the U.S., Mexico and Puerto Rico are again competing this year.

Jimenez, who hails from Cebu, will provide another threat from the Philippines in a sport that has become popular in the country, with an active professional circuit sponsored by Exile Skimboards, a surfboard manufacturer.

Skimboarding or skimming uses a smaller surf board than surfing to glide across the water’s surface to meet an incoming, breaking wave and ride it back to shore.

Skimboarders perform a variety of surface and air maneuvers, at various stages of their ride, out to and back with the wave, like skateboarders.

They score points with the degree of difficulty of their spins or aerial maneuvers. Some of these are known as “wraps,” “frontsides,” “backsides,” “big spins,” “bigger spins,” “360 Shuvs” and others.

Unlike surfing, skimboarders begin on the beach by dropping the board onto the thin wash of previous waves. They then use their momentum to skim out to breaking waves, which they then catch back into shore like surfing.

The sport was born in Southern California, particularly Newport Beach, and spread to other American beaches and South America.

It has now gained a big following in the Philippines, in such places as Samar, Surigao, Zambales and other seaside provinces and cities.

Bazar learned skimboarding from a younger brother and has been competing professionally for the past 10 years.