Fil-Ams worry about compatriots in hospital with Ebola patient

LOS ANGELES—The Filipino-American community in Texas has expressed concern over the safety of the Fil-Am staff at the Dallas hospital where an Ebola-infected patient is being treated in isolation. 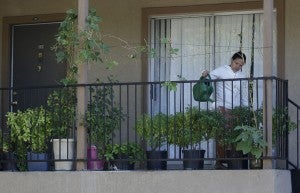 A woman waters plants on the balcony of an apartment in the complex where Thomas Eric Duncan, the Ebola patient who traveled from Liberia to Dallas, stayed last week, Saturday, Oct. 4, 2014, in Dallas. AP FILE PHOTO

“We are particularly concerned about the health and safety of the Filipino nurses, doctors, therapists and technicians working at the hospital,” said Ethel R. Mercado, honorary consul general in Dallas, Texas, in a statement.

Mercado, who also serves as president of the Philippine-American Chamber of Commerce of Texas, said there was “a large concentration” of Fil-Am health professionals working at the Texas Health Presbyterian Hospital and other medical facilities in the Dallas area.

She said they were closely monitoring the situation and were in contact with the Fil-Am staff and the hospital management.

Mercado’s statement came amid reports that as many as 100 people may have had contact with the Ebola victim, Thomas E. Duncan, who was first taken to the emergency room at the Dallas hospital on Sept. 25. The hospital acknowledged that it had misdiagnosed Duncan at the time.

Anyone who came into contact with Duncan between Sept. 24 and 28, when he was placed in isolation at the hospital, is considered at risk of infection, according to health officials.

Mercado said that none of the Fil-Ams working at the hospital were considered to be at great risk of catching the virus, “but we have to keep vigilant and concerned for our many nurses and other hospital workers who may still be at risk.”

She said the hospital assured them that it “employs extreme care, preventive measures and an abundance of caution” to protect the health of its staff.

“In the event that any Filipinos in the area are affected by the virus, the Philippine government and the Filipino community leaders in North Texas will stand ready to give rapid response and provide whatever support is needed for their families,” Mercado said.

They will also launch a public information campaign among North Texas Filipino communities, in coordination with local, state and national health officials, she added.

There were 137,713 Filipinos living in Texas as of 2010, according to the census that year. That number has grown to 200,000, according to community leaders. Some 20,000 live in Dallas and surrounding communities in northern Texas.

Mercado has served as honorary consul general since February under the supervision of the Philippine consulate in Los Angeles, California.