MANILA, Philippines—An official of the Catholic Bishops Conference of the Philippines (CBCP) has reminded the Filipino faithful that Pope Francis’ coming visit to the country is about showing “mercy and compassion” to the survivors of recent calamities who are still struggling to get back on their feet.

The statement of Fr. Resty Ogsimer, executive secretary of the CBCP’s Episcopal Commission on Migrants and Itinerant People, came on the heels of reports that hundreds of poor families living in government-built bunkhouses in Palo, Leyte, would be relocated to sites away from the Pope’s route so he would not see their condition.

“I think that [Pope Francis’] primary purpose is to reach out to the victims so that they may feel that the Church is standing by them after all the trials they have been through,” said Ogsimer in an article posted on the CBCP website. 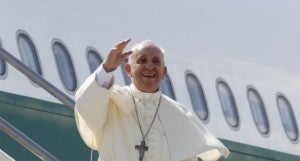 He said the same thing in a recent interview over Church-run Radio Veritas.

Ogsimer lauded Pope Francis for his efforts in bringing the Church’s message of mercy and compassion to all, in spite of the many challenges faced by the Christian community.

“It is a good thing that the Pope is doing his best to connect with people, assuring them that the Church will always be there for them, especially in times of troubles,” Ogsimer added.

According to the National Disaster Risk Reduction and Management Council, the 7.2-magnitude earthquake that rocked Bohol and other parts of the Visayas in October 2013 killed 222 residents, while Supertyphoon “Yolanda” took over 6,000 lives also in the Visayas in November of the same year.

Many survivors of both calamities have not fully recovered from their ordeal, and government and other help reaching them in many cases have not been enough.

The local Catholic Church has been preparing for the Jan. 15 to 19 visit of Pope Francis next year.