Filipino cuisine goes to Harvard with ‘kinilaw’ on the menu 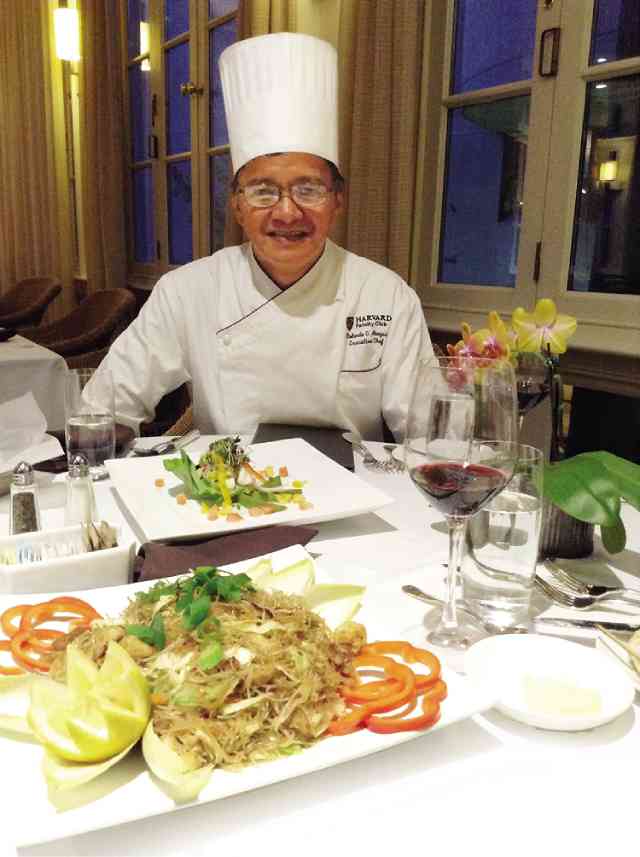 IVY LEAGUE SPREAD Harvard executive chef Rolando Abaquin displays two of his Filipino dishes, “kinilaw” of halibut, scallops and shrimps, and “pancit bihon guisado,” at the Harvard Faculty Club where he has been executive chef the past 3 years. VICTOR SISON/CONTRIBUTOR

CAMBRIDGE, Massachusetts—Now, the Harvard community can have a taste of Filipino cuisine.

Rolando Abaquin, who has been the Harvard Faculty Club’s executive chef for the last three years, is enriching the taste buds of the university’s faculty, students and their guests as he whips up traditional Filipino specialties such as kinilaw (ceviche), lumpia (spring rolls), pancit bihon guisado (sautéed rice noodles) and chicken barbecue.

These dishes, which Filipinos the world over have been enjoying for generations, are becoming popular at the university’s faculty club.

Abaquin, the first-ever Filipino to become the private club’s executive chef, has been steadily introducing dishes with an exquisite and distinctive Filipino taste to the club’s menu.

Club patrons have responded approvingly to his new fine dining offerings, as they enhance the club—and Harvard’s— image as a premier institution that embraces intellectual, artistic and cultural diversity in all its forms.

Last summer (around June to August in the United States), the club changed its menu to include four Filipino dishes that, at first glance, could be mistaken for oriental (Chinese or Japanese) recipes:

Now on the menu, but available upon special request, is pancit bihon guisado.

The Filipino-style skewers have become a favorite among the faculty club’s patrons.

Marriage of East and West

The ingredients—mainly meat, seafood and vegetables—are locally sourced produce. However, he makes it a point to use condiments like ketchup and soy sauce imported from the Philippines to preserve the original taste.

Abaquin is no stranger to feeding the A-list crowd, having been the executive chef of Columbia University in New York for 10 years before moving to Harvard in 2011.

He had regular patrons outside the academe, having served his recipes to the powers-that-be in American politics and show biz, as well as world leaders.

US President Barack Obama is a regular patron of the faculty club, he said.

His latest well-heeled guest was Miss World 2013 Megan Young, who visited Harvard upon the invitation of Cambridge community leaders for a fund-raising event to benefit victims of Supertyphoon “Yolanda.”

One of the owners of Samuel Adams, an American beer brand, is also a regular client.

“If the customer is satisfied, I am fulfilled,” he said, when asked what kept him motivated.

Whether in New York or in Cambridge, Abaquin has maintained the same consistency when it comes to food taste and customer service.

“It’s the quality of food that we serve, the flavor. We have very good customer service,” he said, echoing the feedback of patrons who leave the faculty club satisfied.

But Abaquin’s rise to the helm of the highly competitive American food industry did not happen overnight.

His journey from an impoverished existence in the Bicol region to the US gourmet world proves that talent counts.

But on the whole, his life is a story of pure tenacity, dogged determination and enduring optimism—much-needed personal traits he had to learn and cultivate along the way.

To begin with, he was not even a cook, much less a graduate of any culinary school. When he left Bulan town, Sorsogon province, in 1983, he had just obtained from Bicol University a Bachelor of Science in Agriculture degree, with a major in animal husbandry.

“I’m not a cook. I’m an agriculturist,” he sheepishly admitted.

Leaving his mother and two siblings, he followed his father who, at the time, was working in Hawaii.

He soon found himself enlisting in the US military but his stint was unremarkable. After his training, he decided to leave the service for lack of an appropriate position that would best suit his skills and interests.

He then traveled to New York, where he was offered a job as a dishwasher at the dining hall of Skadden Arps, one of the world’s biggest law firms.

The position, although at the bottom rung of the culinary profession, was just the missing spice that would work wonders into a career that particularly caters to the refined taste and fine dining passions of moneyed clients.

Collazo, perhaps intrigued by Abaquin’s perseverance and uncompromising work ethic, gave him an offer he could not refuse.

Learning on the job

“He asked me if I want to learn how to cook, then gave me his books from CIA,” said Abaquin, referring to Culinary Institute of America, the world’s premier culinary college based in upstate New York.

“He was very kind. He gave me all his books. I learned on the job,” Abaquin said.

But what endeared him to Collazo was his dedication to his tasks, as he made sure the kitchen would be “spotless” every day.

With sheer tenacity and hunger for learning, Abaquin became executive sous chef, the second in command, in just a year.

The two chefs worked in tandem for about three decades, a partnership that saw the duo transferring to Columbia University in 2001.

He also attributed his success to pakikisama (camaraderie), a trait instilled in him by his parents while he was growing up in Bulan.

Abaquin married a Kapampangan, Flo, with whom he has two children, Adrian, 20, and Shayanne, 18.

Despite this feat, Abaquin still goes out with his kitchen staff to touch base and unwind from time to time.

Down the road, he is looking forward to having his own gourmet restaurant in New York, where Filipino-Americans could expect a gastronomic experience that would remind them of the recipes Filipino families have come to love back home.