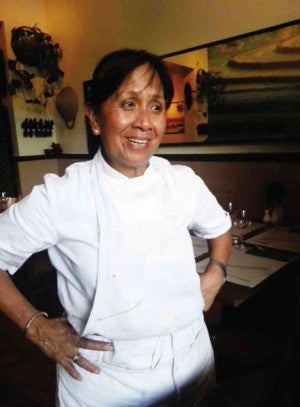 The gourmet tea and coffee shop, which opened in 1995, justifies its whimsical title through the many hundreds of elephantine figurines, posters, and furniture of all shapes and sizes that decorate its interior.

I’ve frequented The Elephant House many times during my trips to Edinburgh. It’s become a favorite place to escape the busy streets of a bustling city and soak up an atmosphere permeated with the magic of Rowling’s imagination. Pay no mind to the typical, sometimes daunting queue of people waiting to be seated.

The time passes quickly, and there’s often plenty of room at the back of the cafe, which amiably buzzes with the cheery chatter and relaxed laughter of tourists and locals alike.

Upon quitting the wet Edinburgh weather and entering the cozy parlor, warmth envelops the body; delicious smells waft temptingly from the cake and pastry countertops.

Their homemade baked goods, the lemon drizzle cake, particularly and their extensive range of hot chocolates are unequivocally delicious.

One hot chocolate, mixed with Bailey’s Irish Cream liqueur, is called Fleur Fantasy, a tribute to the French character Fleur Delacour from a rival wizarding school in the Harry Potter series, perhaps?

My personal favorite beverage, the Mallow Delight, is an Italian hot chocolate topped with marshmallows, whipped cream and plenty of TLC.

A single sip of that warm, rich, sweet cocoa dutifully replenishes my energy after battling with the freezing Scottish showers outside—a sensation which, more than I care to admit, I subconsciously liken to Rowling’s descriptions of butterbeer.

As a fan of Harry Potter, it is satisfying to think that the sight of those grand spires and arches might have, in some manner, provided visual inspiration for Hogwarts castle. 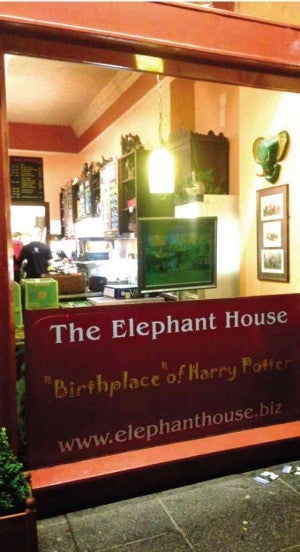 Curiously, however, apart from the large poster heralding the cafe as the birthplace of Harry Potter on the shop window and the matching tourist memorabilia for sale inside, the place remains startlingly low key (apart from the elephants, of course).

Unless you look closely at the various photos and clippings framed on the walls, there is little other sign of Rowling’s presence. Where the magic truly sits, rather unpredictably, is in the cafe toilets.

In the ladies’ room, specifically. Thousands, probably even hundreds of thousands of enduring Potter fans have penned their love for the series all over the walls, mirrors, doors wherever they can find space.

As a great admirer of Rowling’s work, it was difficult not to be moved by the sight of dedicated, adoring fans from all over the world having taken a moment to leave a message of goodwill.

The scrawls on the walls ranged from the straightforward (“I love Harry”), to the life-affirming (“I was definitely not supposed to be a muggle”), to the emotional: “Thank you JKR for making my childhood magical.”

So imagine my surprise when, after ordering another Mallow Delight and musing over Rowling’s creative genius, my sister informed me that The Elephant House is, in fact, owned by a Filipino woman, Aida Valdez Taylor, and her Scottish husband.

The news that a member of my nationality also owned The Elephant House, a place that I already felt a great affinity for on account of being a Harry Potter devotee, further cemented my affinity for the cafe. Filipino-owned, all the way in Scotland!

Some of the elephant paraphernalia in the cafe immediately made more sense: A dark wooden chair, for example, ornately carved into an elaborate elephant head and trunk, rang with Philippine artisanship.

This unusual offer of native Philippine cuisine at an Edinburgh tea and coffee shop became much more understandable upon finding out that Taylor and her husband also own and run a Filipino restaurant around the corner on St. Leonard’s Street.

The restaurant, called Rice Terraces, emphasizes its kusinang Filipino (Filipino kitchen), and its snug interior is decorated with photographs of the world-renowned rice terraces in Banaue and Sagada.

A TOILET wall with fan messages

All meals are served with rice, unless you feel like eating noodles, in which case the restaurant offers pancit canton and pancit bihon, too.

Who could have expected that The Elephant House, a cozy Edinburgh cafe in which one of the world’s most-adored stories was written, had any relation whatsoever to Philippine culture?

The coincidence is phenomenal. It marks how far Filipinos have come. It tells us that the once relatively unfamiliar culture of the Philippines has established itself, in the past few decades, halfway across the Western world in the marvelous city of Edinburgh, Scotland.

That a native Filipino dish is offered so casually on an otherwise Western menu beside shepherd’s pie, haggis and lasagna provides an exciting and uplifting sign of the progress that the Philippines has made in sharing its culture with the world.

The Elephant House, with all its enchanting history, represents the international success of Philippine culture, and further serves to remind us that when the East meets the West, magic truly does happen.