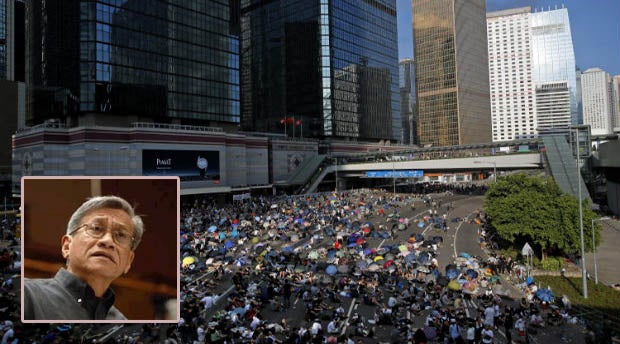 HONG KONG—Insisting that he came as an “ordinary citizen,” Akbayan Rep. Walden Bello spoke to thousands of protesters gathered at the government center here on Saturday, saying the Philippines supported their efforts to attain democracy.

Wearing a black shirt with a yellow ribbon pinned to his chest, Bello said the Hong Kong protests reminded Filipinos of their own struggle against dictatorship, which ended in the peaceful Edsa People Power Revolution in 1986.

He spoke for about five minutes and was applauded by the protesters at least seven times.

“Rest assured that you here, at this time, at this place, you are the center of the world. The         world is looking at you and the world likes what you are doing,” he said.

Bello arrived here Saturday morning and visited the Philippine Consulate General, which is in a building just beside the center of the protests, before meeting with leaders of the Hong Kong Confederation of Trade Unions at the protest site.

“Young people such as those of you who have been here for the last few days, fighting for democracy, you are an example to the Philippines and the rest of the world,” he added.

Bello said he came as a believer in “nonviolence and a peaceful resolution of conflict.”

“And here in your struggle for nonviolent and peaceful change, we in the Philippines support you,” he said.

The protests had been peaceful until police deployed tear gas last Sunday to break up the sit-ins, a government move that backfired, with even more people joining the students in occupying the territory’s major roads, paralyzing transportation and businesses.

Bello also told the protesters that he was speaking not as a member of the Philippine House of Representatives but as an “ordinary citizen.”

“I am not here today to represent the parliament or the House of Representatives… I am here as an ordinary citizen … who values democracy, peaceful change, [and] the energy and idealism of young people,” he said.

“I will go back to my country with a message from you that you will in fact fight for your ideals, fight for your peaceful change, and we are all united with you in the fight for democracy,” he added.

In an interview before he spoke to the protesters, Bello defended his presence at the protest site after being asked if it might be construed as interfering in China’s internal affairs.

“This is really a question of sharing the spirit of democracy. I think this is a more fundamental value. I mean to say you come here and understand and might even support this… We feel [this] is not something that is of an intervention in the internal affairs [of China],” he said.

“We respect [the] internal affairs [of China] but this is really an expression of support for democracy and I think that is something that is universal. There are so many people from different countries. They are not representing their governments. Definitely, I’m not representing my government,” he added.

Bello said he met with Philippine Consul General to Hong Kong Bernadita Catalla, who has strongly warned Filipinos here against joining the protests.

“We were a bit worried about the directive of [Catalla] telling the people to stay away from here because we would like the [overseas Filipino workers] to dialogue with the people and this is one of the best places to do it, just to understand the issues,” he said.

“It’s up to them to decide what to do because the more important thing [is] the democratic values that unite people here and the people in the Philippines, including our [migrant workers],” he added.

“We had a difference on this because [Catalla] felt that their responsibility is to make sure Filipinos are not hurt or worried. If that happens, the burden will fall on them,” he said.

“But it’s not a question of encouraging people to participate but encouraging them to understand what is happening, and they decide what to do,” he said.

Bello was accompanied at the rally site by domestic worker Grace Estrada, chair of the Progressive Labor Union of Domestic Workers-Hong Kong (PLU), an affiliate of the Hong Kong Confederation of Trade Unions.

“For us, although [Catalla] has issued a warning—and we take that as a concern for us [migrant workers]—we are here because we are part of the trade unions and we believe in solidarity and in being one in democracy. It’s not just Filipinos here but also other nationalities,” Estrada said.

Accompanied by her boss

She said she also came to the rally on Thursday with her employer, who is from Great Britain, and her three children.

“My employer is not from Hong Kong but we’re here along with my three wards, triplets who are now teenagers,” said Estrada, who has been working here since 1987.

“This is what we wanted to say to [Catalla] … that the employers are also bringing us along to participate together with our wards,” she said.

She said around 20 PLU members went to the protest site in Admiralty on Wednesday together with their employers.

“The protesters are so young. They’re just students. These are our wards and they are fighting for their future,” Estrada said.

She said her family in Pangasinan had been sending her messages telling her to take care, especially after the attacks on the protesters in Mong Kok and Causeway Bay on Friday.

“But we anticipated that. That happens not just here in Hong Kong. But here (in Admiralty), it’s peaceful every time we come here,” Estrada said.

She said that she and other Filipino domestic workers had participated in previous mass protests in Hong Kong, like the demonstrations during the World Trade Organization meeting here in 2005 and during the handover of Hong Kong to China in 1997.

“So, we’ve seen that it’s safe to hold a rally and express your opinion here in Hong Kong,” she said.

Estrada said that when police try to disperse protesters, they would first hold up color-coded banners to warn them.

“The police would give us a warning if they want us to go. You would see yellow and then red flags. We saw them put up those flags on Wednesday but they did not fire tear gas,” she said.