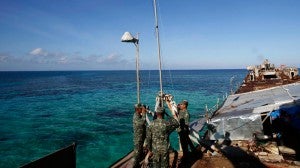 In this March 30, 2014, file photo, Philippine Marines raise the Philippine flag on the first day of their deployment on the dilapidated navy ship LT57 BRP Sierra Madre at the disputed Second Thomas Shoal, locally known as Ayungin Shoal, off the West Philippine Sea. The Philippines on Monday, Aug. 18, slammed what it called China’s “illegitimate sovereignty patrols” of Philippine waters, following President Aquino’s revelation that two Chinese research vessels had been spotted on oil-rich Recto Bank in the West Philippine Sea. AP FILE PHOTO

MANILA, Philippines–Malacañang said Saturday it has shelved planned improvements on a military airstrip in the disputed South China Sea to support its bid for a UN ruling against Beijing over the tense territorial row.

The Philippines infuriated China in March by asking a United Nations tribunal to declare Beijing’s territorial claims in the South China Sea a violation of international law.

China claims almost all of the sea, a vital avenue for world trade that is also believed to harbor vast oil and gas reserves.

But its claims overlap in parts with those of the Philippines, as well as Brunei, Malaysia, Vietnam and Taiwan.

President Benigno Aquino’s spokeswoman Abigail Valte said the government had suspended long-planned upgrade work on a military runway in the disputed Spratly islands to boost chances of a favorable ruling at the UN.

“We wanted to maintain the moral high ground in light of the case we filed at the (UN) arbitration tribunal regarding the West Philippine Sea,” Valte said, using the Filipino name for the area.

“We chose… to ease tensions and avoid any incident that may be construed as ramping up tensions or trying to provoke any of the claimant countries,” Valte said over government radio on Saturday.

The small runway lies on Thitu, the largest of several islands and reefs in the Spratly group that are garrisoned by Filipino soldiers but also claimed by China.

The runway is used mainly by military aircraft to resupply the Filipino troops guarding the island and nearby rocks, as well as a small community of Filipino civilians living on Thitu.

The upgrade plans were suspended by Aquino “sometime in the middle of 2014”, Valte said.

The airstrip project, as well as acquisitions of navy vessels, were part of Aquino’s efforts to upgrade the capability of the Philippine military, one of the most poorly equipped in the region.

China has refused to take part in UN arbitration with the Philippines, and warned Manila that bilateral ties will suffer.

The two countries have been involved in several tense confrontations in the South China Sea in recent months.

Valte dismissed suggestions that suspending the airstrip project would allow China to ramp up its increasingly assertive efforts to stake its claims in the South China Sea.

“In our view, it will not weaken our position,” she added.