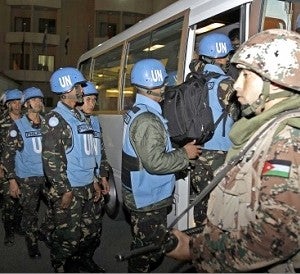 The government will repatriate more than 400 of its troops serving as United Nations peacekeepers in the Golan Heights and Liberia amid security threats and concerns over the Ebola epidemic in West Africa, Malacañang said on Saturday.

Lt. Col. Ramon Zagala, spokesperson for the Armed Forces of the Philippines (AFP), said there were 332 Filipino soldiers serving in the United Nations peacekeeping force in the Golan Heights, Israel, and 115 in Ebola-hit Liberia.

“To ensure the safety and security of the Philippine military troops deployed to conflict-affected areas, the country’s contingents in the Golan Heights and Liberia are scheduled to be repatriated within the year,” the Department of National Defense (DND) said in a statement.

The Filipino peacekeepers serving in Liberia would be repatriated “as soon as possible” due to the health risk posed by the Ebola outbreak in West Africa, the statement said.

“The Philippines prioritizes the safety and security of its troops, but remains committed to the peacekeeping missions of the United Nations,” it said.

Peter Paul Galvez, spokesperson for the defense department, said the repatriation of the Philippine contingent in the United Nations Disengagement Observer Force (Undof) in the Golan Heights would start at the end of its tour of duty in October.

He said the Philippines would not send back its troops to the Golan Heights “unless the situation improves.”

Galvez expressed confidence the pullout would not hurt the country’s standing with the United Nations, recalling that Filipino troops remained in the Golan Heights in 2013 even after Australian, Croatian and Japanese peacekeepers were withdrawn.

But “the situation has become more volatile with increased security risk, hence the recommendation and subsequent approval for repatriation,” Galvez said.

A government statement said there had been instances when troops in the Philippine contingent in the Undof “were caught in the cross fire” between Syrian troops and rebels.

“Given the volatile security situation, the President has decided to withdraw the Philippine contingent to avoid putting Filipino troops at risk,” the statement said.

The President ordered the repatriation of the 18th Philippine Contingent in Liberia “to prevent the possible exposure” of the troops to Ebola, it said.

Ebola has sickened at least 2,473 people in Liberia, Nigeria, Guinea and Sierra Leone and killed more than 1,427 people, mostly in Sierra Leone, since March.

Troops to be quarantined

The World Health Organization (WHO) has declared the Ebola epidemic, the worst in history, a “public health emergency of international concern.”

While none of the Filipino peacekeepers in Liberia has fallen ill, the government said that the quarantine protocols of the Department of Health and the WHO would be “strictly followed” for the Philippine contingent.

The soldiers will be quarantined for 21 days before they leave their mission area for the Philippines, as the incubation period of the Ebola virus is between two and 21 days.

The troops will also be quarantined for another 21 days upon their arrival in the Philippines.

The government said the military was preparing a repatriation plan for the Philippine contingent in Liberia.

It also gave assurance that steps would be taken to ensure that the troops’ return would not lead to an outbreak of Ebola in the Philippines.

The Philippines has been sending peacekeepers to Liberia since 2003.

A Filipino seafarer is being monitored in Togo, also in West Africa, for signs of Ebola, but authorities say the Philippines is still Ebola-free, despite dozens of migrant workers returning from Liberia.

The Philippines has been sending a battalion-size contingent to the Golan Heights since 2009.

In March 2013, Syrian rebels briefly held 21 Filipino peacekeepers and kidnapped four more two months later. All of them were eventually freed on the intercession of the United Nations and the Syrian government.

Peacekeepers have been caught in the middle of fighting between Syrian troops and rebels in the Golan Heights, the area of separation, between Syria and Israel, which has been largely quiet for nearly 40 years.

Israel captured the Golan Heights from Syria in the 1967 “Six-Day War,” and the countries technically remain at war.

Syrian troops are not allowed in the Golan Heights under a 1973 ceasefire formalized in 1974.

The Undof, which has been monitoring the ceasefire, has about 1,000 peacekeepers and civilian staff from India, Nepal, Ireland, Fiji, Moldova, Morocco and the Philippines.

Galvez said at least 14 troops in the Philippine contingent served as staff of Undof while the rest were deployed to the southern part of the area of separation.

He said the Philippine embassy in Damascus had reported that the security crisis in the Golan Heights had become worse.

The embassy reported that the peacekeepers on patrol were being shot at and getting divested of their weapons and vehicles, he said. With a report from AFP

PH to pull out peace troops in Golan Heights, Liberia