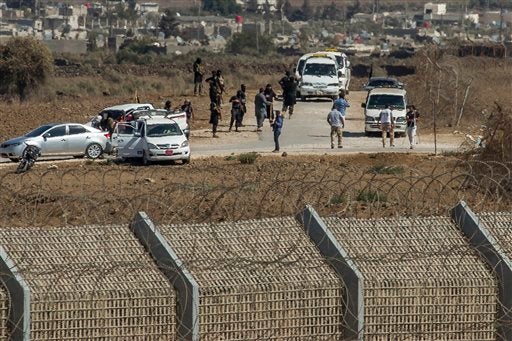 Al-Qaida-linked Syrian militants gather around vehicles carrying UN peacekeepers from Fiji before releasing them, as they arrive near the Syrian village of Al Rafeed in Syrian-controlled side of the Golan Heights, seen from the border of the Israeli side Thursday, Sept. 11, 2014. AP

MANILA, Philippines—Immigration authorities have begun tightening the protocols for the entry of foreigners coming from the Middle East and Africa, following reports that the Islamic State in Iraq and Syria (ISIS) was recruiting followers in the country.

“We are not on red alert status but we are paying careful attention on them,” Immigration Commissioner Siegfred Mison said in a telephone interview Saturday.

By careful attention, Mison meant that travel records and plans of the passengers coming from troubled areas in the Middle East and Africa would be looked into thoroughly.

But Mison clarified that the bureau’s operations in the country’ ports of entry and exit are not out of the ordinary, but authorities were only concerned about the situations in the Middle East and Africa affecting the country.

Mison said that in case of doubt, a traveler will be “referred to its secondary inspection,” meaning a more stringent interrogation.

“Yes, there will be more questions and it might take more time than the usual,” Mison said.

Mison advised immigration officers to treat all travelers with equal respect regardless of their race and their points of origin.

The immigration chief expressed confidence, however, that no one connected to ISIS has yet slipped into the country.

“Based on the information our intelligence agencies have gathered, it is still highly not probable that members of ISIS have reached the country” to recruit members, Mison said.

Mison said the bureau was in contact with international organizations to obtain a list of personalities associated with ISIS.

Nonetheless, he said, the bureau was adjusting its screening process according to events not just in Iraq and Syria, but also in West African countries besieged by the Ebola outbreak, the biggest in the world’s recent history.