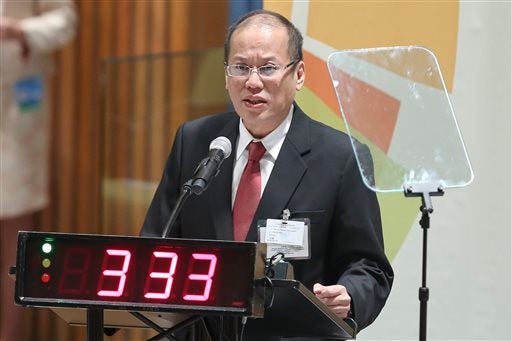 UNITED NATIONS—President Aquino on Tuesday called on nations to end a protracted debate and work together to save the world from the perils of climate change.

Joining some 100 world leaders at the one-day UN Climate Summit, the President said one nation should not wait for another’s action before determining its own, saying this would only defeat the goal of establishing a collective and effective response to mitigate the effects of global warming.

“The time of debate of whether climate change is real or not is over. There is no doubt that it exists, which is the reason we are all here. It would be wrong, however, to engage in another protracted debate over the individual commitments of countries. To my mind, that would be adopting the wrong framework,” Aquino said.

“Instead, everyone here has to do everything they can to address climate change, without first waiting for their neighbors to engage in action. Doing anything less leaves the problem unattended, too, thereby increasing the problem we all face,” he said.

“It would not be an exaggeration to say that Filipinos bear a disproportionate amount of the burden when it comes to climate change,” the President said, pointing to the battering his nation received from Super Typhoon “Yolanda” (international name: Haiyan) in November last year.

At the UN summit held after tens of thousands rallied around the world, presidents and prime ministers urged action to combat climate change, but pledges remained well short of goals. France promised $1 billion to the Green Climate Fund, making it the only contributor other than Germany to the new institution that would help the worst-hit countries.

UN Secretary General Ban Ki-moon said that $2.3 billion had been pledged to the Green Climate Fund, but the amount was well below the $10 billion aimed for by yearend let alone the $100 billion a year aimed starting in 2020 to help poor nations cope with rising temperatures and disasters.

The UN chief called the meeting more to build momentum than to reach concrete achievements. It was the first such event since the Copenhagen summit on climate change ended in disarray in 2009 and aims to set the tone for a conference next year in Paris designed to seal a new global agreement.

French President Francois Hollande said the Paris conference should deliver a “global and ambitious” deal and warned that climate change posed a “threat to world peace and security.”

US President Barack Obama, addressing the summit hours after ordering strikes on Syria, said that the “urgent and growing threat of climate change” would ultimately “define the contours of this century more dramatically than any other” issue.

The Philippines has taken important measures in an effort to address the effects of climate change despite its limited resources, Aquino said, citing the enactment of the Renewable Energy Act in 2008.

“We are now treading a climate-smart development pathway. We continue to take steps to maintain and even improve our low-emission development strategy and the trajectory of our energy mix. And we are hopeful that our fellow developing nations, especially those who have been gaining the economic wherewithal to pursue similar strategies, will tread a path akin to ours,” he said.

Fears of being wiped out

Small island nations fear that climate change will literally wipe them out as water levels rise, turning their people into environmental refugees.

“Tuvalu’s future is in your hands. The time for denial, for hesitation, for pandering to the interests of the fossil fuel industry is over,” said the Pacific island’s prime minister, Enele Sosene Sopoaga.

In one notable promise, New York Mayor Bill de Blasio vowed that the metropolis and host of the United Nations would cut its emissions by 80 percent by 2050, a level of ambition that activists say is needed at a national level.

Nations, including the Democratic Republic of Congo, Ethiopia, Guatemala and Uganda, said they would restore 30 million hectares of tropical forest, more than doubling the 20 million hectares already pledged through a global initiative.

Leonardo DiCaprio brought star power to the UN summit, urging leaders to stop treating global warming as if it were fiction.

“As an actor, I pretend for a living. I play fictitious characters often solving fictitious problems,” DiCaprio, sporting a ponytail and suit and tie, told the summit. “I believe mankind has looked at climate change in that same way as if it were fiction.”–With a report from AFP