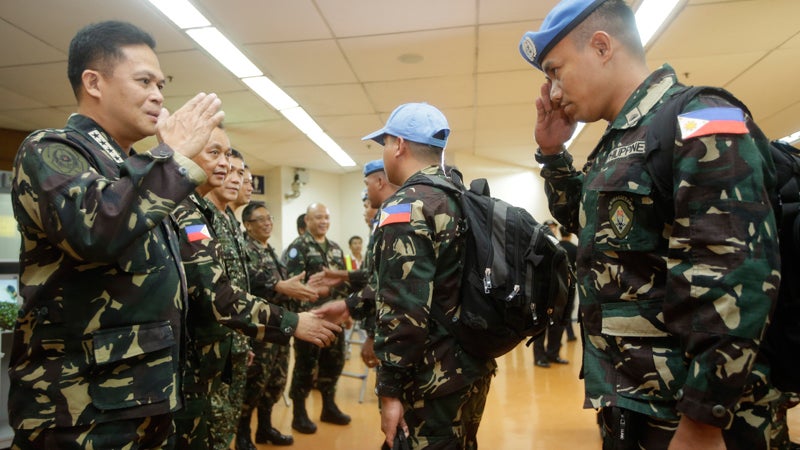 Philippine Armed Forces Chief Gen. Gregorio Pio Catapang, left, salutes to welcome Philippine troops, who were deployed in the Golan Heights as UN peacekeepers and recently battled Syrian rebels, upon arrival late Sunday, Sept 21, 2014 at the Ninoy Aquino International Airport. President Aquino is expected to lead the welcome party for the Philippine contingent upon his return from his trip to Europe and the United States. AP PHOTO/BULLIT MARQUEZ

MANILA, Philippines–A heroes’ welcome awaits the Filipino soldiers who have returned from the Golan Heights after serving in the United Nations peacekeeping mission there.

President Aquino is expected to lead the welcome party for the Philippine contingent upon his return from his trip to Europe and the United States.

The festive homecoming is tentatively set for Sept. 26 in Malacañang.

“The President will lead in welcoming them home. Details are still being worked out but, definitely, they will call on the President,” said Lt. Col. Ramon Zagala, Public Affairs Office chief of the Armed Forces of the Philippines.

The first batch of 244 Filipino soldiers arrived on Friday night at Villamor Air Base in Pasay City as Tropical Storm “Mario” battered the country.

Zagala said the second batch of 84 troops was expected to arrive late Sunday night at the Ninoy Aquino International Airport via a commercial flight.

The military is also planning a motorcade for the soldiers.

The country pulled out the 7th Philippine Contingent, led by Lt. Col. Ted Dumosmog, from the Golan Heights two weeks ahead of schedule amid the worsening situation in the region.

Last August, some 75 Filipino troops found themselves trapped in a standoff with Syrian rebels who surrounded their two encampments, demanding their weapons.

The tense situation ended after a seven-hour firefight and the escape of the Filipino soldiers under cover of darkness.

AFP Chief of Staff Gen. Gregorio Pio Catapang Jr. commended the peacekeepers “for showing resolve and determination in fulfilling our country’s commitment to their mission of preserving the integrity of the line of separation between Syria and Israel.”–Julie M. Aurelio

Hopes dim for return of Philippine troops to Golan