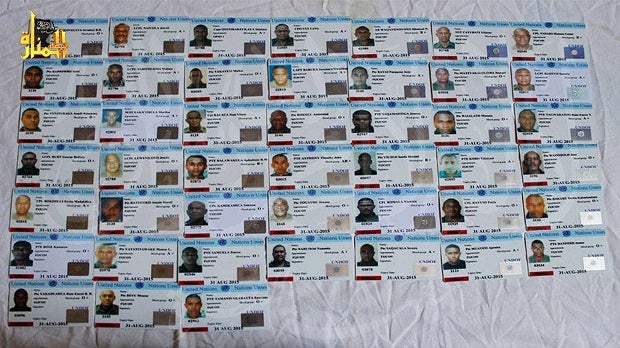 This undated image attached in a statement released on Saturday, Aug. 30, 2014 on the Hanin Network website, a militant website, shows the identification cards of Fijian UN peacekeepers who were seized by The Nusra Front on Thursday in the Golan Heights in the buffer zone between Syria and Israel.  AP

MANILA, Philippines – As agreed upon even before Filipino soldiers engaged Syrian rebels in a gunfight over the weekend, no additional peacekeepers will be sent to Golan Heights, Malacañang said Thursday.

Communications Secretary Herminio Coloma Jr. said the 75 soldiers would finish their tour of duty until October then return to the country.

(If you recall, even before the incident last week, we have already announced the decision to just finish the current tour of duty; that is the decision.)

“We want to complete our tour of duty and wind down our UN (United Nations) commitment in the proper way,” he added.

He said the decision had nothing to do with the standoff that put the lives of Filipino soldiers in peril.

Late last week, 75 Filipino troops were caught in a standoff with the same group of Syrian rebels who captured 45 Fijian peacekeepers.

While the other half of the group was able to pull out, the other half (stationed at Position 68) was forced to fight off the rebels for seven hours before escaping in the middle of the night.

Just days before the standoff, authorities said Filipino soldiers serving in the United Nations Peacekeeping force in Golan Heights and Liberia will soon pull out because of the escalating conflict and the outbreak of Ebola.

“With regard to Golan Heights, there has been a series of incidents involving our peacekeepers which have demonstrated that they are exposed to unexpected serious risks which may worsen on the basis of current developments,” Department of Foreign Affairs spokesperson Charles Jose said last August 24.

“It has been established that there is a greater need for our soldiers to be in the Philippines,” he had said.

Jose explained at that time that the UN was aware that the government was “assessing the evolving situation” in Golan Heights.

Meanwhile, Coloma said the Department of Foreign Affairs (DFA), Department of National Defense (DND) and the Armed Forces of the Philippines (AFP) are in close consultation with the United Nations on the issue on whether United Nations Disengagement Observer Force (Undof) commander Lieutenant General Iqbal Singh Singha indeed told Filipinos to surrender to the rebels.

“After all, the deployment of Filipino peacekeepers is a UN matter and that is a matter of international diplomacy for which the DFA is responsible,” Coloma said.

He said President Benigno Aquino III specifically asked for the complete report of the incident to get the complete picture.

(We are not contradicting what the Armed Forces of the Philippines said. Of course we are standing by the bravery and skill of our troops. But it is also important to see the complete picture, especially now that we are concluding our commitment.)

Foreign news reports said Singha denied giving such an order. But AFP Chief of Staff General Gregorio Pio Catapang said Singha refused to put his order in writing, prompting Filipino peacekeepers to instead follow the escape plan of Capt. Nilo Ramones, head of the peacekeeping force at Position 68, with the coordination of Col. Ezra Enriquez, Filipino chief of staff of the United Nations Disengagement Observer Force (Undof) in Golan Heights.

Peacekeepers in a changing world