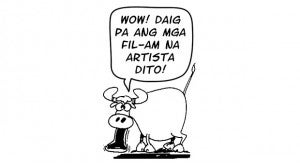 PARIS—He stands 6-foot-4 (1.9 meters) and is a dead ringer for NBA superstar Kevin Durant. Not only that, he speaks fluent Filipino.

One of the biggest surprises President Benigno Aquino III probably had during his European trip was meeting a towering, Filipino-speaking Frenchman named Wesley Romain.

Romain, 26, raised his hand to ask a question during a forum organized by French Institute of International Relations here.

Mr. Aquino took notice as soon as the man walked toward the microphone.

“Perhaps they can recruit you for the Philippine basketball team,” the President said in jest.

But the real surprise came when the French guy replied, “Gusto ko pero hindi ako magaling (I would like to but I’m not good).” He went on to ask about “security sector reform and peace-building issues in the Philippines,” a question eventually lost on Mr. Aquino, who remained amazed with the Filipino-speaking Frenchman in an audience of French policy experts.

Romain asked a second question, “Pwede bang kumuha ng isang picture sa inyo (Can I have a photograph with you)?”

Romain later told reporters that he was an exchange student of international studies at the University of the Philippines (UP) in 2011. He said he extended his stay and volunteered for various nongovernment organizations, such as Gawad Kalinga.

The President said he would “of course” accommodate the request for a photo-op but was so distracted that he had to be reminded of Romain’s more important question.

Mr. Aquino said the Philippines was “improving our capabilities to defend ourselves” but “we don’t want to neglect the better side again,” meaning investments in social services, such as health and education.

Asked about the peace efforts in Mindanao, Mr. Aquino said he was “very optimistic about what will happen in the Bangsamoro.”

“Again, the international community has been helping. Britain, with its experience in northern Ireland, has given us very important inputs from the very hard principle level to the nitty-gritty of policing …. So we are fortunate that the world is sharing with us their experiences so that we do not reinvent the wheel and we do not make the same mistakes,” he added.

At the end of the conference, the moderator announced that the President would be ushered to the car waiting outside for his next engagement. Mr. Aquino told his host that there was still one thing he had to do, pointing to the Filipino-speaking French man in front of him.

Romain won’t be leaving without his selfie with the President.